A glimpse into the Nexus 2015: metallic, and perhaps twice as fast

Recent reports promise us two new handsets from the flagship Google Already in the coming months, and it seems that each of them will be very powerful and advanced

There is no doubt that the ranks of the Naxos brand have dwindled greatly in the past year. From a situation where we had two tablets and two smartphones created under the guidance of Google And in order to provide the ultimate Android experience, we have reached a situation where we actually have only one tablet, טאבלט One - and also streaming media that is probably not really interesting to most consumers. It can even be exacerbated and declared that the Nexus brand has become virtually irrelevant since the end of 2014.

Despite all this, it seems that Google is planning a big comeback for the familiar and popular family of devices - with not one, but two new smartphones, one of which will come from LG as the direct replacement for HNXUS 5 wonderful, While the other will reach us From Huawei As a new partner, will determine its status As one of the significant forces Market, and will be an alternative (or perhaps a full substitute) Nexus 6 של Motorola-Lenovo.

The very existence of the Huaxei smartphone is already officially confirmed, prima facie, Although the technical details we know are still mere speculation - Very impressive speculation, Worth mentioning, which speaks on an 5.7-inch QHD screen, a new Snapdragon 820 chip from Qualcomm, 4GB RAM, fingerprint sensor, USB Type C connection And a metallic body (for the first time for a Nexus device). Intended launch date - during the fourth quarter of 2015, coinciding with the official launch of Android version, presumably. 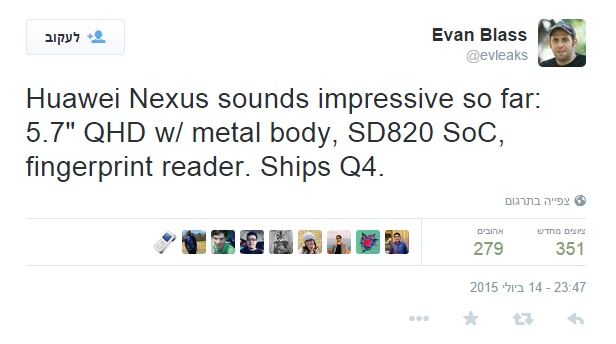 About LG's new Nexus device We have fewer details. In this case too, we have already received official references that confirm the fact that this smartphone Is indeed in development - and will not be based on the appearance or general parameters of the LG G4, for better or worse. In recent days, we received an initial hint about the technical specifications that are expected in the third Nexus from LG - In the form A huge result of 85,000 points in the popular Antutu test, which supposedly belongs to him.

This sounds very promising and puts the new Nexus as the most powerful smartphone on the market, but we find it hard to believe the authenticity of the whole story: the two new leading chips we have not yet fully realized are The Snapdragon 820 Quad core of Qualcomm, And the 10-core Helio X20 chip from Mediatech.

No Nexus device to date has come with a Mediatech chip (and LG itself has a very small number of devices based on Taiwanese products), and therefore it is very hard to believe Helio X20 In charge of the giant's output, although that sounds reasonable enough given Antutu's great love for multi-core. The second and more logical option is The new Snpadragon 820 chip, Just as intended to be China's Naxos Huawei.

In this case too, we find it difficult to believe that a quad-core chip, efficient and advanced as it may be, will easily pass through all the cores in the list of cores The Samsung Exynos 7420, Which reaches a score of 68,000 points), in a test that, as noted, places considerable emphasis on multiple cores. After all, this is a result that is higher than 10,000 points The fearsome Tegra X1 chip של NVIDIA, Which is unable to access smartphones due to relatively high power consumption.

Despite all the negativity we sent towards that mysterious Antutu result, as long as we have no other indication - it does not seem to hurt to hold fingers, and dream that the Snapdragon 820 could indeed be such a huge leap forward. This could certainly be great, not just for the future Nexus but for a wide range Of leading smartphones New Which are supposed to be based on it for the next six months.

We will continue to monitor and update you accordingly, while wondering about a suitable replacement For the Naxus 7 tablet Which in the meantime was not really in sight, and a pity.