The Korean manufacturer's new middleware is exposed in all India with a thin waistline, a Super screen AMOLED And enhanced camera

At the same time as reports of plans to launch slightly upgraded flagship devices in the coming months, Samsung seems to be preparing to continue expanding Supply Its middleware with a new top model that goes there Galaxy A8.

Samsung 's new smartphone will be a slightly upgraded version of the The Galaxy A7, And maybe even replace it on store shelves, with a super-bright XMUMX-sized Super AMOLED screen and an 5.7p resolution, chip Snapdragon 615 Quad-core Cortex A53 with a maximum frequency of 1.7GHz and four Cortex A53 cores that can operate at a maximum frequency of 1GHz, as well as an Adreno 405 graphics core. Volume of memory RAM Of 2GB and volume storage Built-in 16GB, which this time for a change will also be accompanied by a slot microSD For additional 64GB extension.

Additional features The Galaxy A8 will have a built-in fingerprint sensor, a secondary 5 megapixel camera, an Android OS 5.1 with its familiar TouchWiz interface, a Gorilla Glass 4 cover on the front of the device, an NFC chip and a built-in 3,050mAh battery, 450mAh vs Brother Galaxy A7. 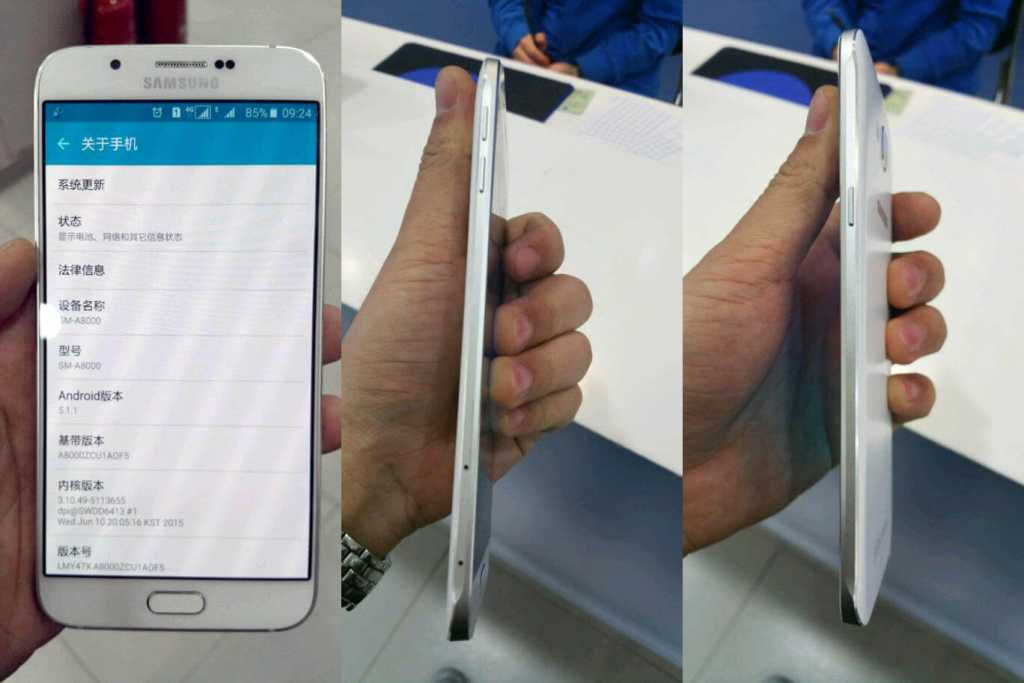 What may be the punch feature of the Galaxy A8 is its camera, which will likely be grounded sensor ISOCELL Of Samsung At a resolution of 16 megapixels, similar to the one that came with a part From devices God-Galaxy S6 andGalaxy S6 Edge (while the majority came with a sensor from Sony), only thinner and more compact. It is possible that the minimization of the sensor in question, which is intended to ensure that no skin bulge is produced in the devices in which it will be integrated, will not improve with the resulting photo quality - but by and large it means that theGalaxy A8 is supposed to offer photo quality in the highest league of flagship devices, which is a rather unique feature for a device aimed at (the upper part of) the middle market.

In terms of appearance, the Galaxy A8 looks almost identical to the A5 and A7 that came before it (and also to the Galaxy S5, to a large extent), and their quantity will include a metal strip in its shell combined with plastic - but this time with an impressive thinness of 5.94 millimeters, which is enough To become the thinnest device of סמסונג Has always been, although not really the thinnest smartphone in the market, as we know.

The Galaxy A8 is probably Samsung's most woozy device outside of its S and Note families, but it will face stiff competition from Chinese players who have just launched products like The MX5 וHonor 7, Which also know how to offer a metal shell and quality in every aspect, and with a price that is not less than that of the giant from Korea.

Does coexistence seem to exist here, or is it? סמסונג Will find out the hard way that the Chinese manufacturers have long been not only a minor nuisance but a real threat in all categories? Tell us what you think.