New details about chip God-Snapdragon 820 Exposed: 14 nm, Four-core only, and a promise of improvements between 35 and 40 in performance versus current best

This year has been one of the most disappointing years for Qualcomm on SoC, since acquiring the ARM chip division of AMD And burst into collective consciousness sometime at the end of the previous decade, using renowned devices such as the HTC HD2, the original HTC Desire and the Nexus One. The American giant, which has become accustomed to relying on processing cores that it has developed and improved independently, has decided to adopt the standard cores ARM In its current generation to accelerate system support and 64 bit applications, but eventually found itself with a Snapdragon 810 product, Performence Relatively disappointing compared to the previous generation, and also tends to heat unhealthily that makes manufacturers and consumers think twice before choosing it.

Therefore, Qualcomm will now have to prove that it has not lost its magic touch yet, and the stage will be chip The Snapdragon 820 - the company's next flagship product, announced with a minimum technical description early this year. Now, new technical details about the chip purport to present us with a slightly more interesting picture - just before the (supposedly) official exposure Qualcomm Itself, in 11 in August.

According to current information, the Snapdragon 820, which will answer the MSM8996 model name, is manufactured in a 14 nm manufacturing process based on FinFET "3D" transistors, much like the technology found in the heart of the latest Exynos 7420 chips סמסונג That conquered the peaks of the Android world this year - which seems to confirm the rumors of Qualcomm's move from Taiwanese TSMC (which offers a 16 nm production process, not 14 nm) to the ex-company production סמסונג.

The chip in question will contain four general processing cores in Qualcomm's dedicated design, which will meet Hydra's name - unlike the Kryo name we've also heard from the company itself so far. The new processing cores purport to provide a performance improvement of about 35 percent compared to the Cortex A57 cores we saw on the Snapdragon 810 chip, and next to them is a new generation graphical kernel that will answer the name Adreno 530, ensuring an improvement of about 40 percent in performance 30 percent power consumption, probably due to the jump to much more cost-effective new production technology. To summarize, Qualcomm seems to be aiming to improve between a quarter and a little more than a third for the maximum performance of chip The new flag compared to the current one, and all this alongside the resignation of the same problem of warming, of course, oppressive. 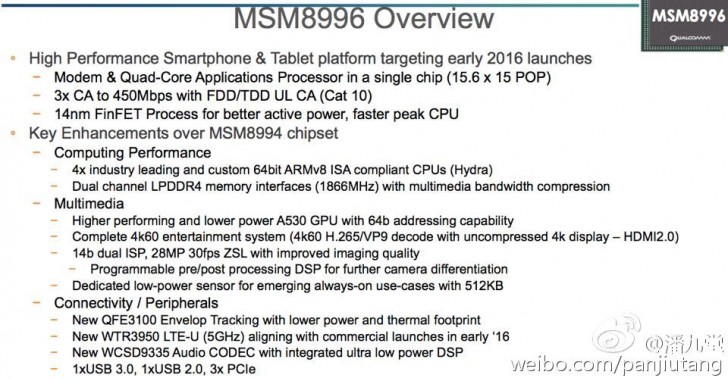 Other significant "bonuses" we can expect on Snapdragon 820 include a memory controller DDR4 With high-speed 1,866MHz speeds, a highly advanced built-in modem that supports the fourth-generation 10 category (the most advanced to date), support for ultra-high-speed UFS 3.0 memories and eMMC 5.1 memory memories, And impressive support for photography, encoding and decoding of resolution 4k 60 frame rate per second. This is not officially mentioned in the leaked images, but it is reasonable to assume that the new chip will also offer support for screens with a resolution of 4k, Which threaten to become the new high-market standard already during 2016. 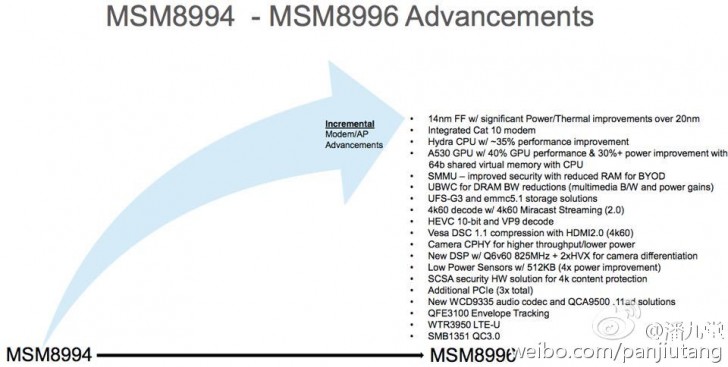 Over the coming week, we hope we get all of the above information officially from Qualcomm itself, and then we will also know whether to expect first-time products to adopt the San Diego manufacturer's record of technology this year, or just somewhere early next year.

Between the Helio X20 and the Meidatek Helio X30, future products on the Exynos line סמסונג And of courseSnapdragon 820 - There is no doubt that the end of the current year and especially the first half of next year will be another interesting time in the world of smart devices, and we have nothing but patience to wait until we find out who will be the big winner in the new round.