One name, various chips: all details on Huawei's Kirin 990

Original article: The Kirin 990 chips were unveiled to the world a little before they starred inside the Mate 30 - with state-of-the-art manufacturing technology TSMC And a significantly enlarged graphical core

The largest Chinese smartphone maker took advantage of the largest IFA show in Europe to provide us with a juicy announcement that is all a kind of teaser for another big announcement that will arrive in a little less than two weeks - chip The Kirin 990, which will actually be a family of two products with similar names and slightly different characteristics, with the highlight being in the Kirin 990 5G which will first contain a modem Mobile phones Built with support for second generation, third generation, fourth generation and of course the new generation that is gaining momentum in some developed countries across the globe.

Kirin 990 5G is based on a 7-nanometer lithograph second-generation from the Taiwanese TSMC, which incorporates a number of EUV phases. Extreme Ultra Violet) in production that enable more economical and efficient chips - with a pair of large and powerful Cortex A76 cores at a maximum frequency of up to 2.86GHz, an additional pair of Cortex A76 cores at 2.36GHz designed to provide large processing power at a more efficient working point and four small and cost-effective Cortex A55 cores Up to 1.95GHz to implement more basic operations at maximum efficiency.

The Kirin 990 5G will feature an enlarged Mali-G76 graphics core with 16 processing clusters at a maximum frequency of 700MHz, instead of the Mali G76 core with ten processing clusters in the Kirin 980 that operated the leading Mate 20 and P30 models, will include fast storage support In UFS 2.1 and UFS 3.0 standards, a computational learning system in architecture called Da Vinci with a pair of large processing units and one tiny processing unit that will be operated according to the required task - and a built-in Balong 5G modem, which is so far in the package chip Separate on motherboard and not inside chip The main processing.

The Kirin 4's 990G models are available for use right now, and will launch the first versions of the Mate 30 and Mate 30 Pro to hit stores - while the Kirin 990 models 5G Will be available at a slightly later date, and probably less relevant for the Israeli market in the first phase due to a reasonable assumption that they will be part of similar but more expensive smart devices. In any case, it would be quite intriguing to examine the pair of chips running side by side - and to compare the power consumption and actual performance obtained from two different innovative technological manufacturing processes.

updating: B-Huawei Distributing a new teaser that confirms another smart model that will be based on the Kirin 990 - the Honor Vera 30 5G. We still do not know when exactly this will happen given that the Honor 20 and Honor 20 Pro models were introduced less than half a year ago, but if you take into account European prices starting at 500 euros for this pair - the Vera 30 5G May be very interesting with all this innovative processing power inside. 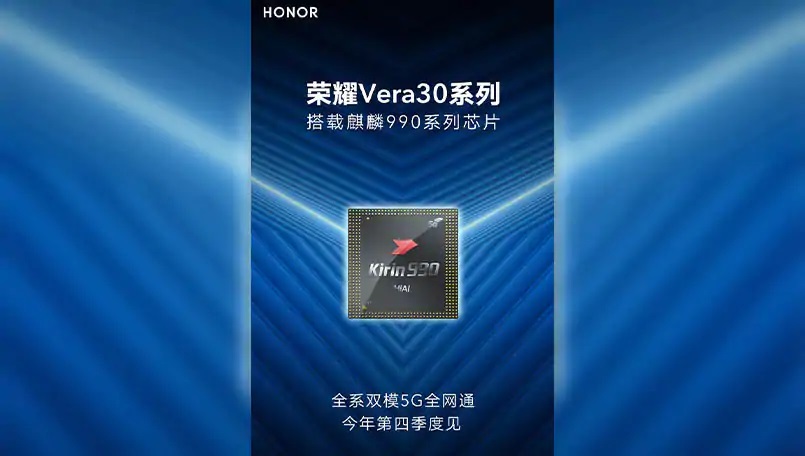