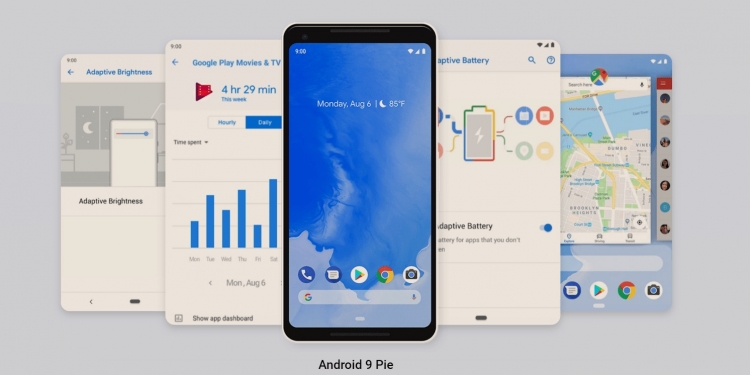 No Popsicle and Pumpkin Pie - the official name of the latest operating system from home Google Will be just Pie, Pie, and is available for download in its full version starting today.

As always, the update comes first from home Google Itself,pixel The first and second generation in this case (the entire Nexus series has been forgotten in the back) that prove once again their value to all those who have to try the newest capabilities before everyone else - with the main surprise also being available for the device.Essential Phone Of Andy Rubin, who will no doubt be able to give him credits for a forthcoming launch of the next generation in the not too distant future.

Other devices that participated in the beta program for Android 9.0 and devices that are part of theAndroid One should also receive the device before the end of the current year, with this list included Nokia, A few models from the Xiomi house,Xperia XZ2,OnePlus 6 and others. And what about the other popular smartphones on the market? Here everything starts to get complicated, when every manufacturer needs to meet its promises of support (if any) according to its own schedules.

What do you get in Android Pie? The most notable changes are probably built-in support for screen gaps of all types and genders so that no information is hidden from the user's eyes, and also an updated navigation method based on a single software button and its various smooth gestures along with horizontal switching between applications in multi-task mode Horizontal).

Other interesting additions are improved and more precise text selection, enhanced contrast that makes fonts more readable and clearer in all resolutions and display sizes, a smarter automatic brightness mode that really does the job and does not jump frantically between different steps depending on the light sensor situation at any given time, And microphone for Apps Which operate in the background in favor of greater privacy, a better life situation battery Improved that will be based on learning each consumer's preferences and nature of use for better results - and also a correction to the volume control interface so that it appears on the screen next to the physical buttons designed for it and allows a constant choice between media control and ringtone control.

Some of the capabilities of the pie version will not be available in it right now - dedicated options that should reduce the use of the device before bed and prevent excessive use of the device in general will be added to the system only for the winter, as well as the Slices feature. Apps That exist on your device in the results of the Google Search app Google, To complete actions faster and more intuitive than ever before.

Are excited about the arrival of the 2018 version, or are you satisfied with the old and familiar update and interface you already have on your device? Let's talk about it.