Strong, but not leading: the performance of the Galaxy Note 9

The latest Galaxy Note Officially presented with four different tones and internal innovations such as a touch pen with active wireless connectivity, 128GB or 512GB internal volume storage combined with 4GB or 6GB LPDDR8X, respectively, an advanced Super AMOLED screen that expands to 6.4, God-Galaxy S9 Plus and a generous 4,000mAh battery - all at an ambitious price starting at $ 1,000 in North America (excluding tax) and € 1,000 in Europe (with the addition of local VAT).

One area that has not undergone an apparent change in the new work is all that has to do with processing - in the United States, Japan and China will still be offered Qualcomm Snapdragon 845 devices that enjoy wider coverage of exotic cellular frequencies and technologies, while in Israel and the rest of the world the model will be marketed with the sophisticated octagonal Exynos 9810 of סמסונג Itself, with four cores Exynos Self-developed M3 at a maximum frequency of 2.7GHz, four-core Cortex A55 1.8GHz frequency and a Mali-G72 graphics core with 18 processing clusters.

What should make the difference is the Note 9's cooling system, which includes a steam-like technology that the company calls 'Carbon Cooling' and a heat spreader that is 3 times larger in area than the Note 8 - all in order to cope Better with the heat generated from the main processing chip of the device and minimize the situations where overheating leads to a cut in performance. In practice, this does not seem to directly affect the maximum performance of the smartphone - which is on the side (and even a little behind) those we already saw half a year ago from theGalaxy S9 and M-Galaxy S9 Plus. 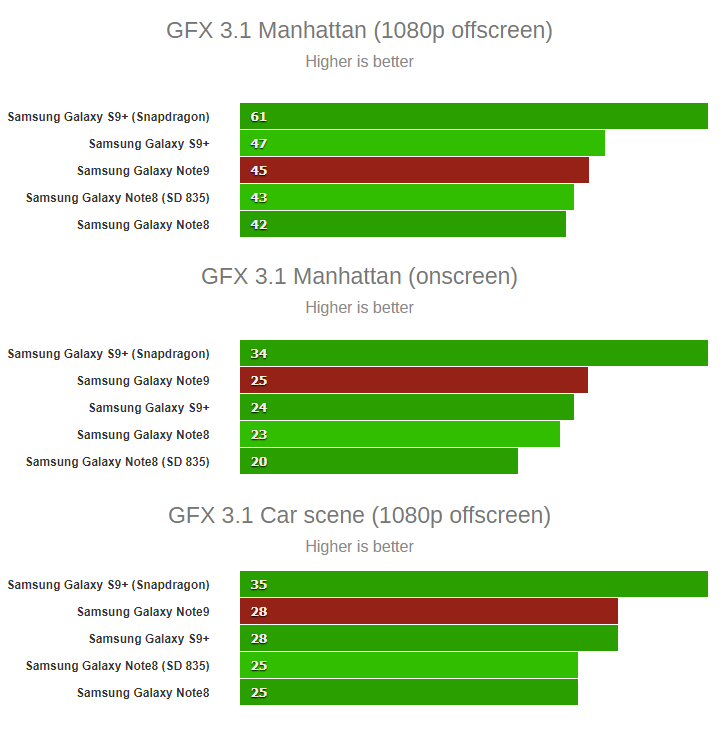 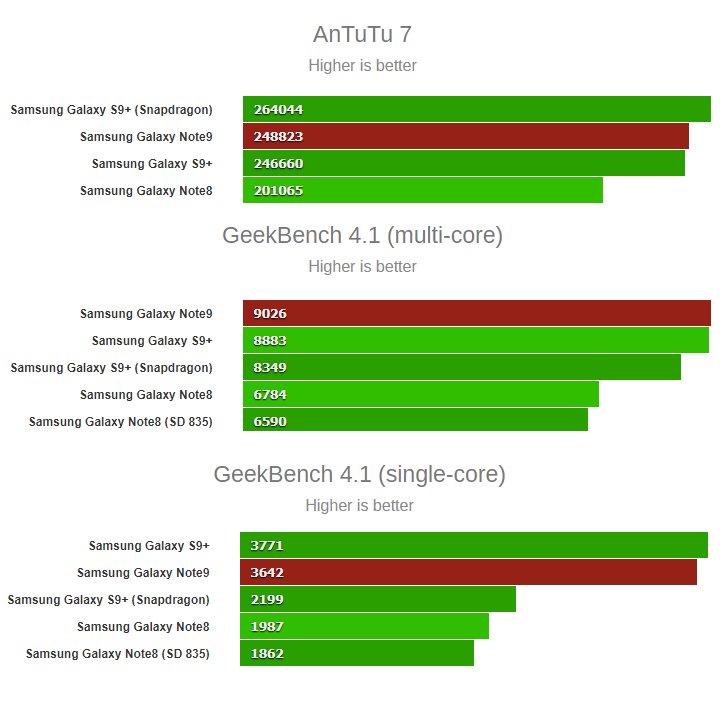 ModelExynos 9810 leads in CPU processing - but leaves the crown to Qualcomm in the GPU segment
Source: gsmarena.com

In terms of overall processing core capabilities you can see a leap here compared to last year's Note 8 offered by Snapdragon 835 and Exynos 8895 chips, but when it comes to the graphics processing capabilities that play a major role in gaming which should be the main beneficiary of the advanced cooling system - the Note 9 version Its global Exynos is only slightly faster than the results obtained in the previous incarnation, and still stands at a significant distance behind theGalaxy The American-Chinese S9,Snapdragon 845.

We certainly hope that the Note 9 will be less hot to the touch as part of long and strenuous continuous use, but if you expected that the technology inside will also improve the maximum performance it is able to achieve relative to its sibling, this is unlikely to happen - even when we see the final and official version reviews To arrive starting August 24th.

Are you considering upgrading to the new note, or is the price high enough to make everyone consider it again? Let's talk about it in reactions!