The monster from the east: Huawei has a new and very advanced chip • HWzone

The largest Chinese manufacturer in the smartphone market, claims to leap first over its rivals in terms of performance

For years, we have seen Huasei's subsidiaries, HiSilicon, chasing the technological capabilities of the leading products from Qualcomm, סמסונג And even manage to narrow the gap and reach a situation where they are "good enough" for most consumers, but not much more. Now, atHuawei Hope to finally reverse this trend and become a technological leader - at least for a short period of time.

The tool that should allow this is chip Kirin 960, which uses a number of innovative technologies before all its competitors and purports to offer Performence Truly victorious, uncompromising and without starlets.

The Kirin 960 has eight processing cores, four of which are innovative Cortex A73 cores that are set to make their commercial debut at this chip, up to 2.4GHz operation, alongside four economical Cortex A53 cores that operate at up to 1.8GHz frequency - G71MP8 in the company's new and improved Bitfrost architecture ARM, Which will operate at an 900MHz frequency, with the entire chip based on the production process of the TSMC In the 16 nanometer,Kirin 950 andKirin 955 of the company.

Beyond the use of the controller supports LPDDR4 memories up to 1,800MHz speed, using the new generation interface layer of ARM CCI-550, official support for the UFS 2.1 standard for structured storage, chip New dedicated i6 for all peripheral sensors, built-in modem A new generation that supports 12 LTE technology for speeds up to 600 megabits per second and an updated image processing engine that finally supports recording and decoding of content 4k All are expected to contribute to a more advanced, agile and sophisticated general package in Kirin 960 than all previous HiSilicon andHuawei, Who tended to have disappointing graphics capabilities and support that is not as rich as the competition. 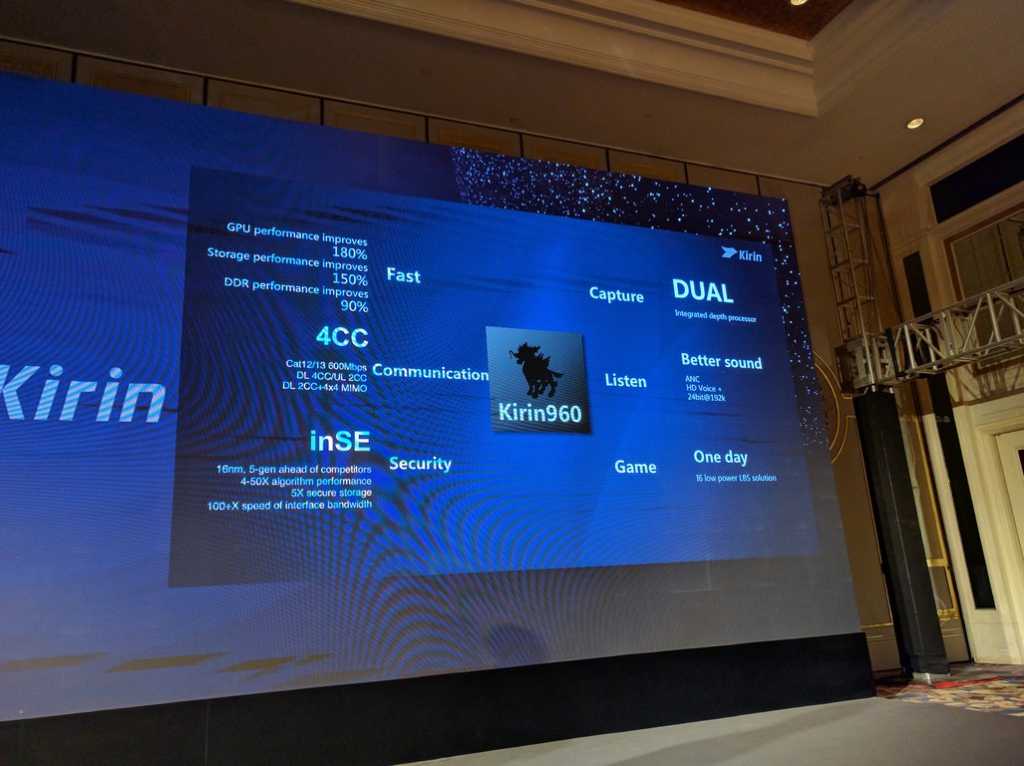 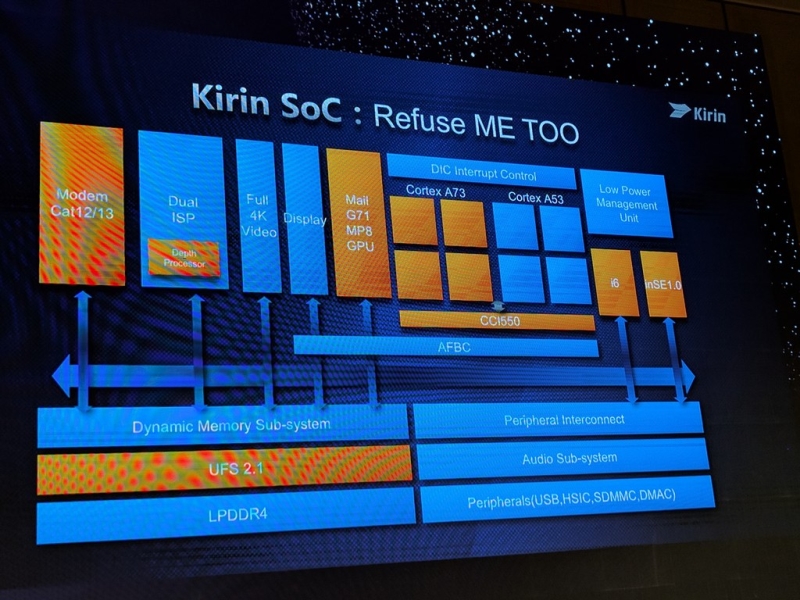 We will not be able to judge objectively until we see practical and independent results, but Huawei declares tens and even hundreds of percent bandwidth improvement for dynamic memory, built-in storage performance, and especially graphics processing capabilities - with numbers that are enough to get past the Snapdragon 820 821 and Exynos 8890 in popular performance tests such as Geekbench and GFXBench to sit on the throne of the Android Market (but without overshadowing chip The dreaded A10 Dark, worth mentioning). There are also promises for photo capabilities that surpass those of the new 7 iPhone, significantly enhanced audio capabilities, capabilities Security Upgraded and more. 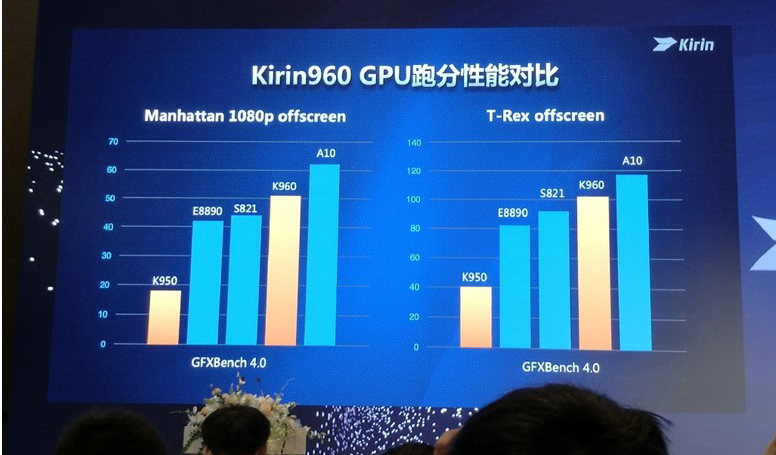 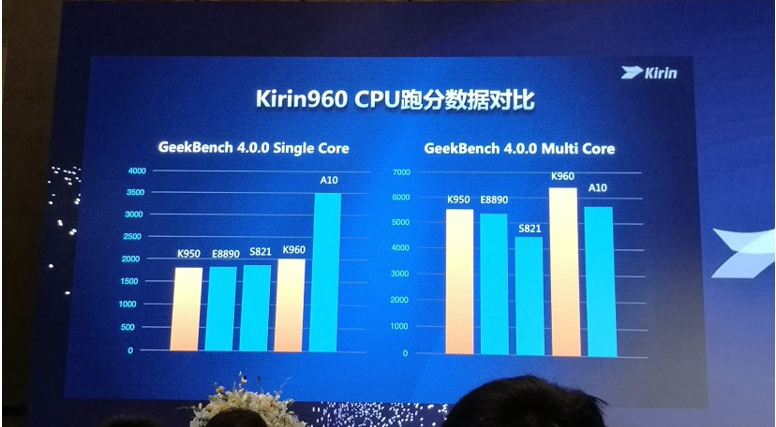 The improvement in general processing capabilities is relatively modest, but it is probably fine to take into account that this was the leading category of high-Kirin So far

The Kirin 960 chip is expected to reach the market in commercial products before the end of the year, and is expected to become the most advanced Android chip in the environment (supposedly) before the arrival of the next generation Qualcomm And Samsung, based on a production process of 10 nm, during the first half of 2017, which will probably take the lead again (but will not preventHuawei To be at a much better technological point than it has been to this day). 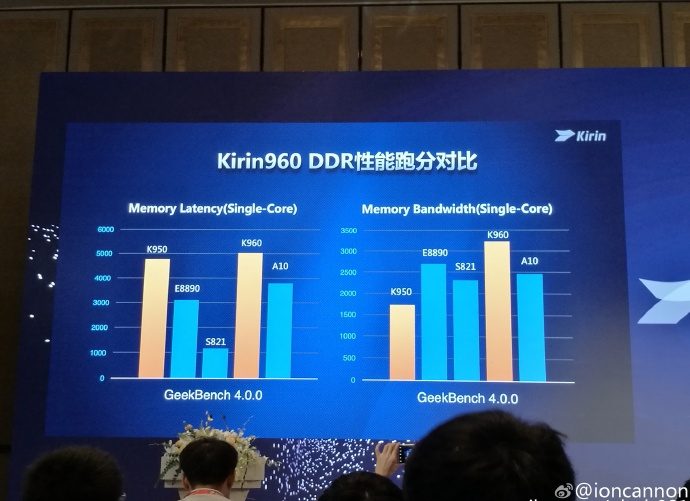 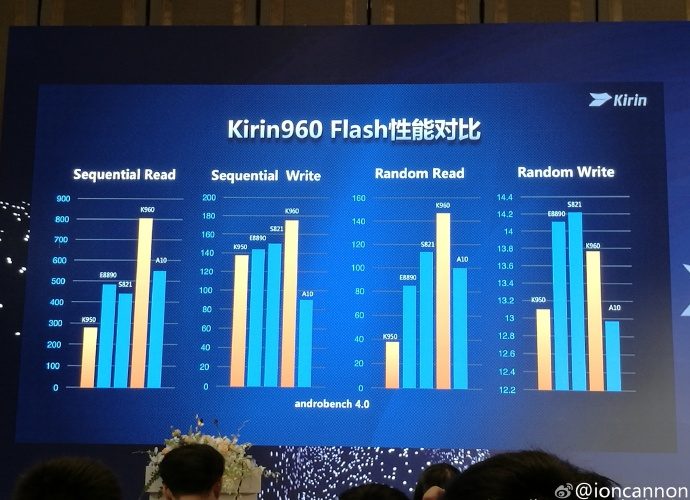 A promise of 800 megabytes of transfer per second on a smartphone (!) Is not something you hear about every day - let's hope these aren't empty promises

The first smartphone to include the new and advanced chip is the Mate 9, which is reportedly supposed to offer an 5.9-inch screen, memory RAM And volume storage Of 4GB to 6GB and 64GB to 256GB respectively, a dual main photography array with a pair of 20 megapixel sensors containing optical stabilization systems and more. We do not yet know when the launch will take place,Kirin 960 implies that it will not take much longer, probably.

Huawei has already started charging price tags that are very similar to those of its major international competitors for its recognized flagship products - and it now appears that it will finally have the full hardware package to justify it. what do you think?