Continuum: Microsoft will turn any smartphone into a stationary computer

Expanding the Continuum concept Windows 10 for smartphones will allow you to connect them to large monitors, and turn their applications into full desktop applications

The link between many of Microsoft's announcements and demonstrations in Build 2015 was the concept the company calls Continuum. You may remember the Continuum From the beta version of Windows 10, As the trick that allows the new operating system application to adapt to a desirable interface: for example, if you have disconnected the keyboard and mouse, the application will switch to contact mode, making a series of visual and interface adjustments to allow for more efficient interaction - for example, increasing the space of points The touch that enables selection and drag.

But Continuum is much more than that: it's an ambitious vision whose ultimate goal is to work on all your devices, all sizes and types of display, through any existing interface, seamlessly and automatically - and without having to download more than one version of the application. Phones, as the devices that go with us everywhere, play an important part in this vision - and for the first time, Microsoft demonstrated how they are likely to integrate into it. The demo included a phone Windows Connected to the mini-HDMI input of a desktop monitor, keyboard and wireless mouse: its applications were interpreted on the big screen and from that moment turned into desktop applications for all intents and purposes, including mouse control, the ability to copy and paste text between Apps And even support Alt-Tab switching between applications. 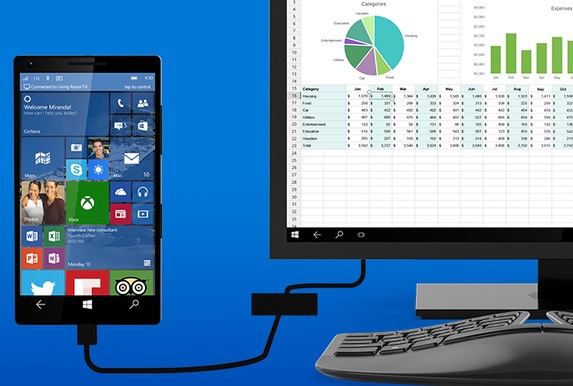 By now, one can imagine the point at which this vision meets one day: All we need is a single, compact computer that we carry almost all the time: maybe we'll wear it like a watch, maybe attach it to a shirt like the Star Trek communicators, and maybe it will We will be implanted under the skin. This computer will communicate with various endpoints around the world - large TV monitors, mobile touch monitors, Holographic glasses - and will allow us to work on each while adjusting its display format and interface configuration to the terminal type. Of course, in most cases, this computer will probably not be more than a terminal itself, which will connect us to our servers Network Who will make most of the calculation effort.

Meanwhile, we are still at 2015, and Continuum promises to provide developers with tools that allow them to write applications that adapt like a chameleon to a variety of screen types and means of input - and to consumers a user-experience, work, viewing, and gaming experience that can flow seamlessly from sitting, outside, and kitchen to living room. Download an application Windows 10 once, to your smartphone, and it can track you to any device Windows 10, while preserving the exact information and location you were in and wearing new and optimal skin for the device you skipped: phones Windows The existing generation of devices, which is under development, is designed to do so by supporting Brandor into two different views at the same time. According to rumors, the first phones that are available for Continuum are new flagship devices on the way from Microsoft, based on a processor Qualcomm Octagonal cores and will reach screen sizes of 5.2 and 5.7.