Foldable OLED TV in the living room, robots in the kitchen

LG will probably be able to receive the title of most active representative of CES 2018, which is reflected in a massive amount of new announcements and products from almost every category the company struggles, which were also presented on stage at its personal press conference - and at the grand stand it set up for tens of thousands of visitors. For the huge exhibition to be impressed. What was there? The details are in front of you.

The whole house is smarter

LG's main display was its updated Smart Home, all around a thin speaker named ThinQ, which supports Amazon's smart assistant and that of Google, But hopes to stand out on the ground thanks to his personal artificial intelligence system that claims to learn its users and adapt itself to their lifestyle, using the voice commands of the partnership to provide a comfortable common language within the process. 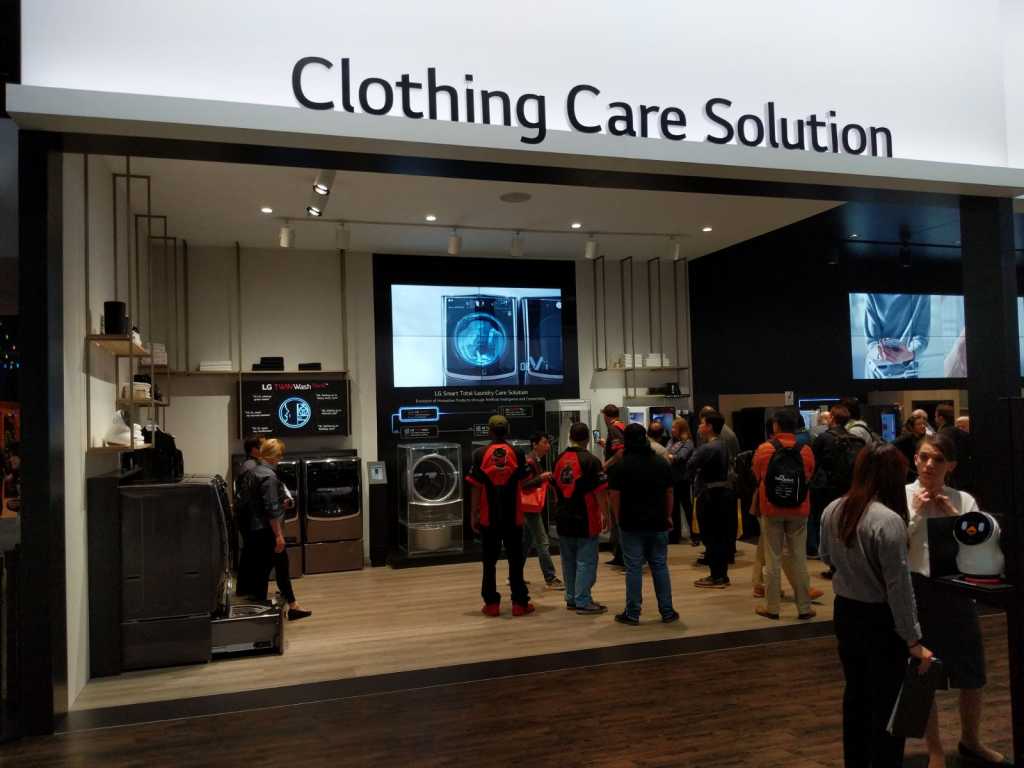 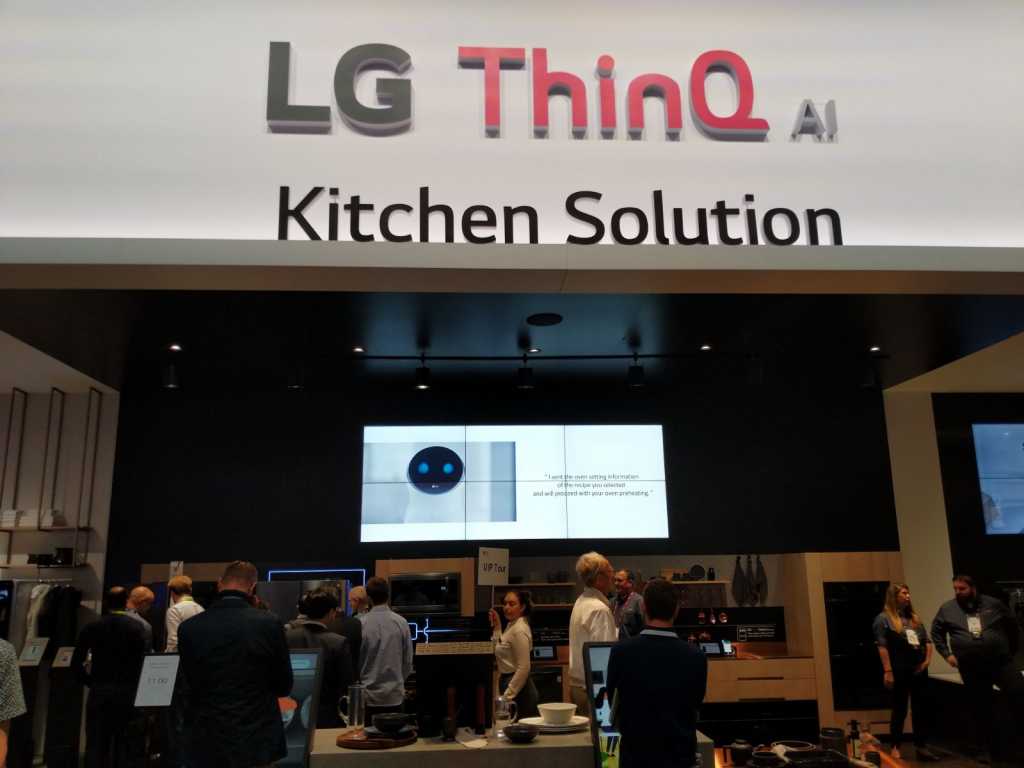 Solutions for the kitchen, laundry room, living room, office and even the car - all under one brand and one roof

LG has launched a complete line of home appliances that carry ThinQ branding on their behalf to clarify the ability to be connected and operated directly from the same, robot. Refrigerators with large touch screens will be able to send orders to the smart oven based on the recipe you have chosen to prepare and also to prepare you a shopping list according to what is missing or is going to end, even when the vehicle and electrical appliances in the user's office can To be connected to the learning environment, which can also be controlled from the special application on your smartphone. 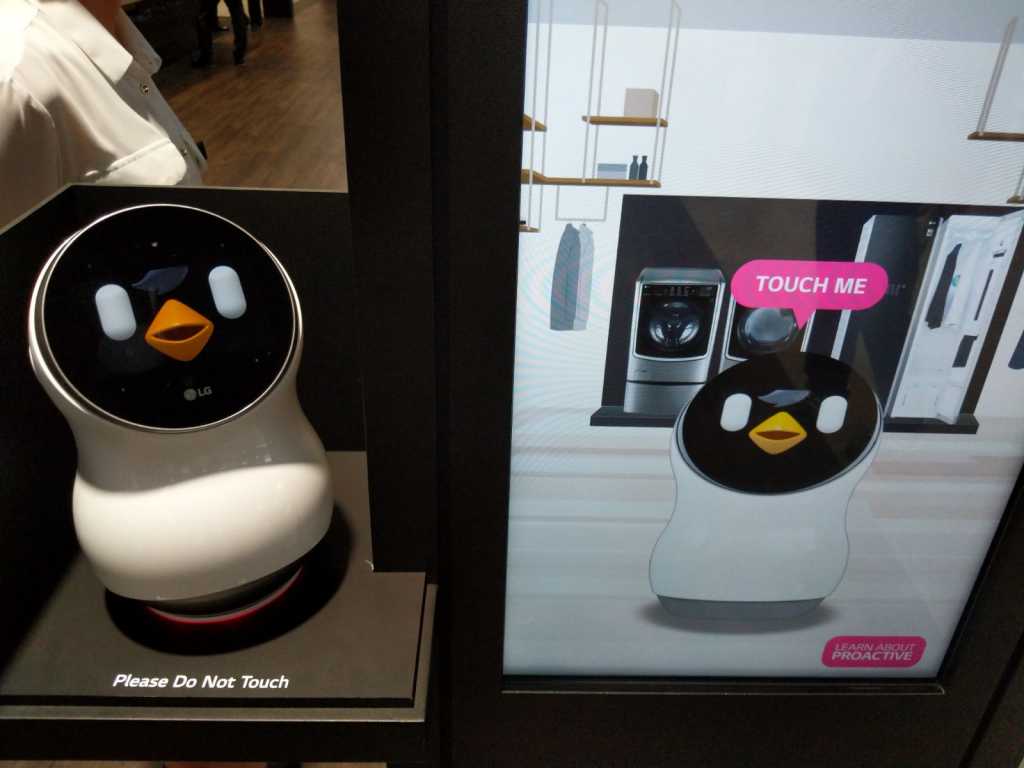 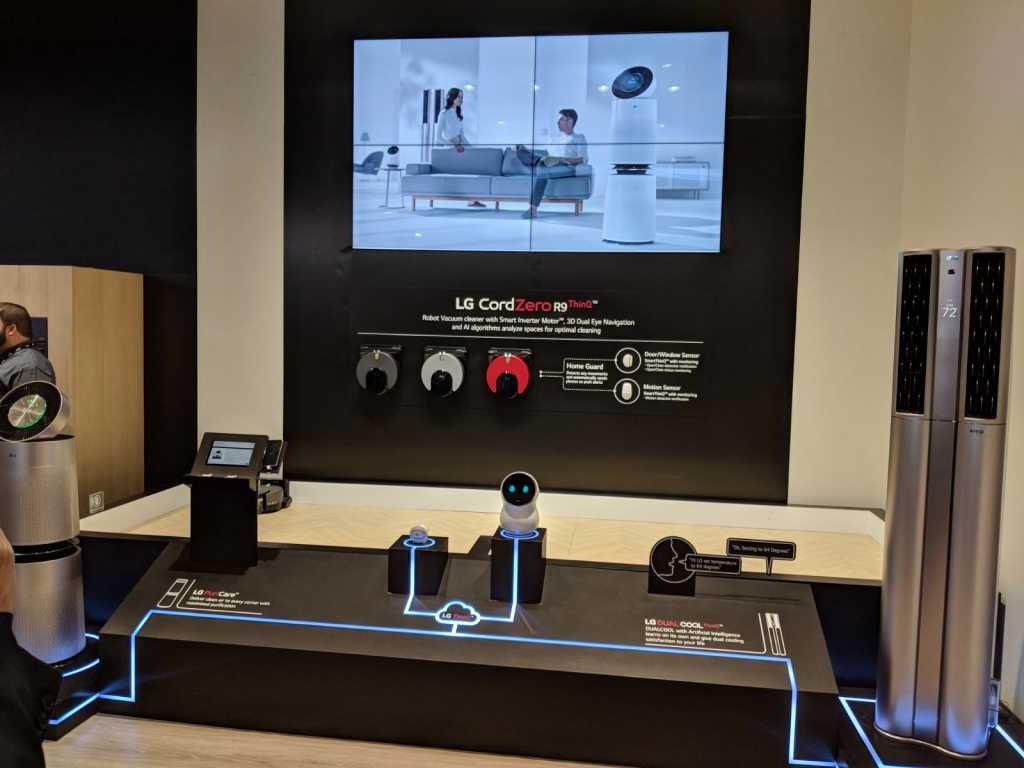 Why settle for a smart speaker who understands orders when it is possible to receive robot Kindly be your personal assistant?

If that was not enough, there would also be robot Small and cute called CLOi, which is designed to be a slightly more interactive and "tangible" home assistant than those routines inside the smart speaker - and will be able to adjust the operation of the various ThinQ devices in the house according to your personal agenda.

A visit to the LG booth - the smart kitchen

The most impressive laptops around

In LG's mobile corner starred its new Gram models, of course, which continue to be the lightest in their categories even though on the face of it they do not give up any of the features of direct competitors - ultra-tough metallic casing, minimal-border screens, square Kaby Lake-R processors Cores, connections Thunderbolt 3 and extra capacity batteries for life battery Up to 20 hours, all weighing less than 1 kg for models with 14 and 13-inch screens, and weighing less than 1.1 for the 15-inch model.

There was also a stand dedicated to the most prestigious and advanced smart device presented by the company to date - the LG V30, with an emphasis on its low weight and compact dimensions in relation to its screen size. These figures are generally impressive, but become much more impressive when you consider that this metal and glass body has also been adapted to meet the military (!) Standard of protection against blows and falls, which no other flagship device has (except theGalaxy S Active).

Prestige beside the personal computer

The company's computer screens were easily lost, with three corners, each of which gave visitors intense colors and fast refresh rates from the company's updated offerings, including 4K and 5K (wide or ultra-wide) ) With their Thunderbolt 3 connectors and chaining capabilities and support for the new DisplayHDR standards, large gaming screens supporting AMD's FreeSync 2 technology or G-Sync technology NVIDIA And with refresh rates of up to 144 Hz and more.

Most of these new screens also included the application of Nano-IPS, Which has landed in the field from the world of televisions and improves the quality of the backlight to allow very advanced control of the wavelengths emitted from it - which in turn allows coverage of very wide color complexes with minimal price increase compared to other technologies designed for this.

A visit to the LG booth - computer screens

TVs that build a new world

True, Intel had an impressive and colorful LED tunnel on display - but forLG There was a whole mall! The massive performance of the company was spared no means and consisted of 246 (!) OLED TVs in resolution 4k, Who presented a unified image and wrapped the visitors in a way that is difficult to explain in words alone - or even through documentation Video Like the one you can see here.

A visit to the LG stand - the LED Tunnel

Google, recommend me what to expect

Another product with surprising intelligence capabilities was the new W8 OLED TV, which offers 4K resolution with HDR support (of course) and built-Google Assistant, which will allow the user to receive news updates and traffic jams, information about the actors in the movie or series he is watching and recommendations for similar content, set automatic shutdown at a certain time or after a certain program ends and even order food (in certain places in the world) , But simply through the voice. There is no doubt that in terms LG The future is a smart help that is built into every home appliance, small and large. 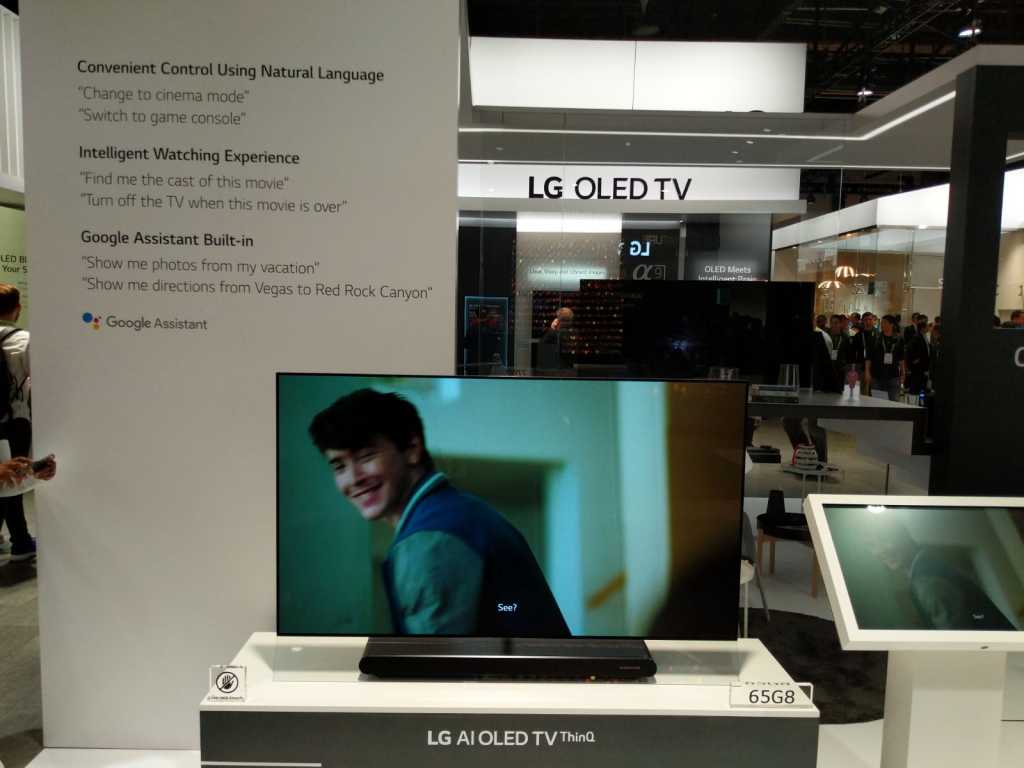 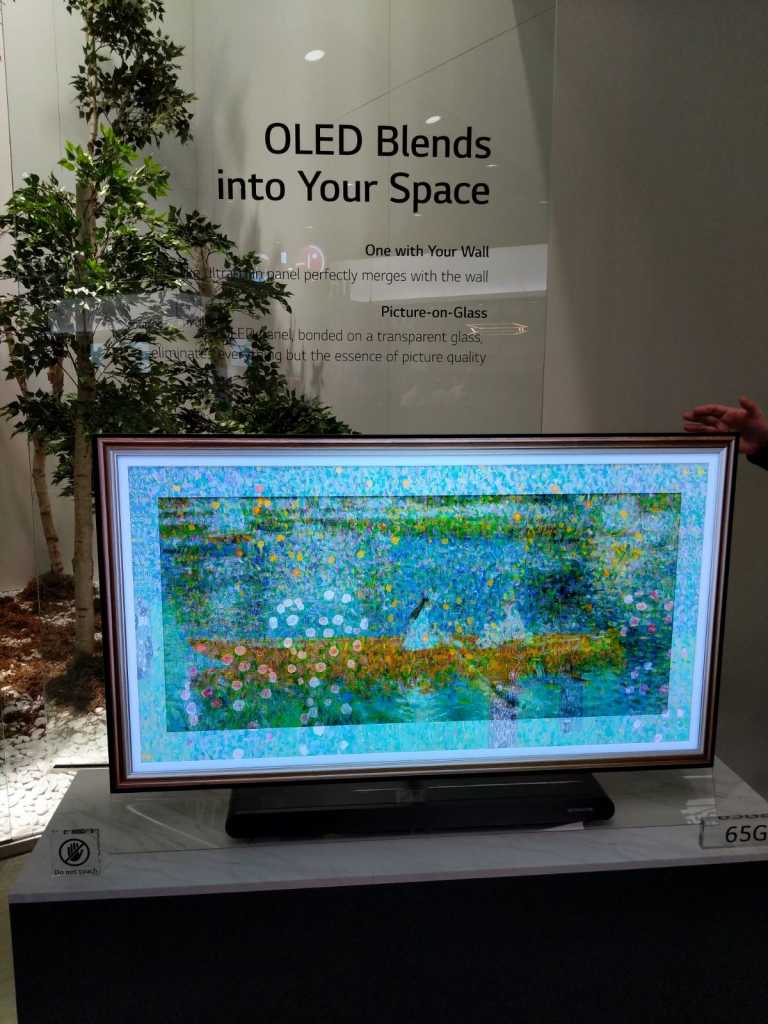 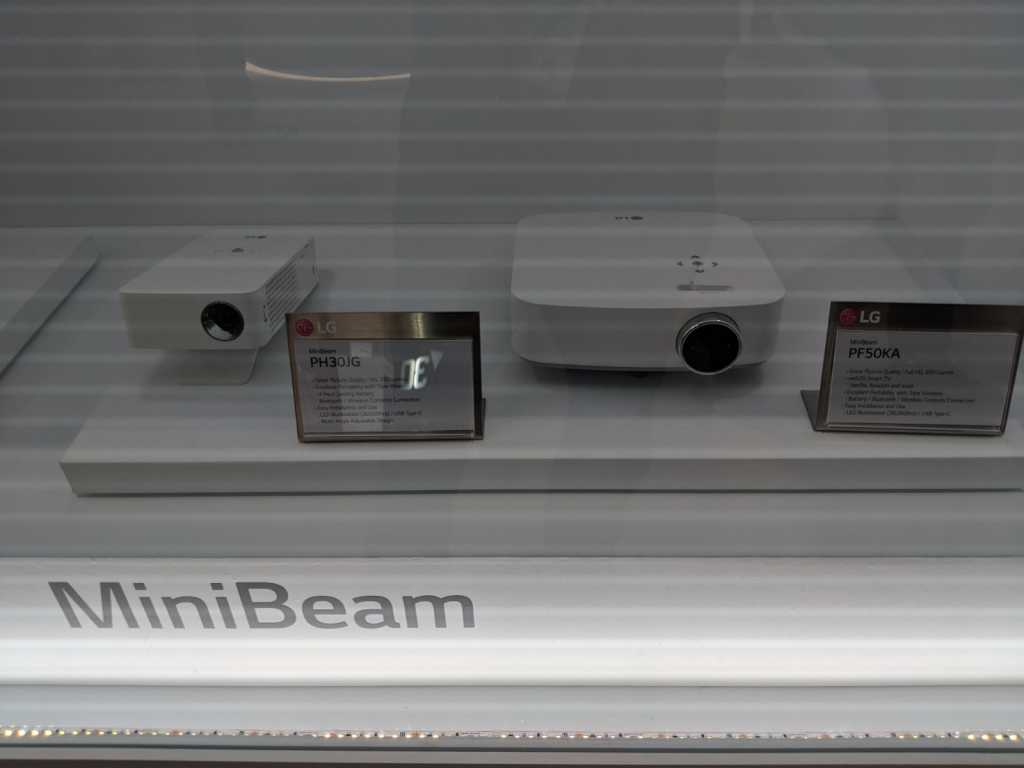 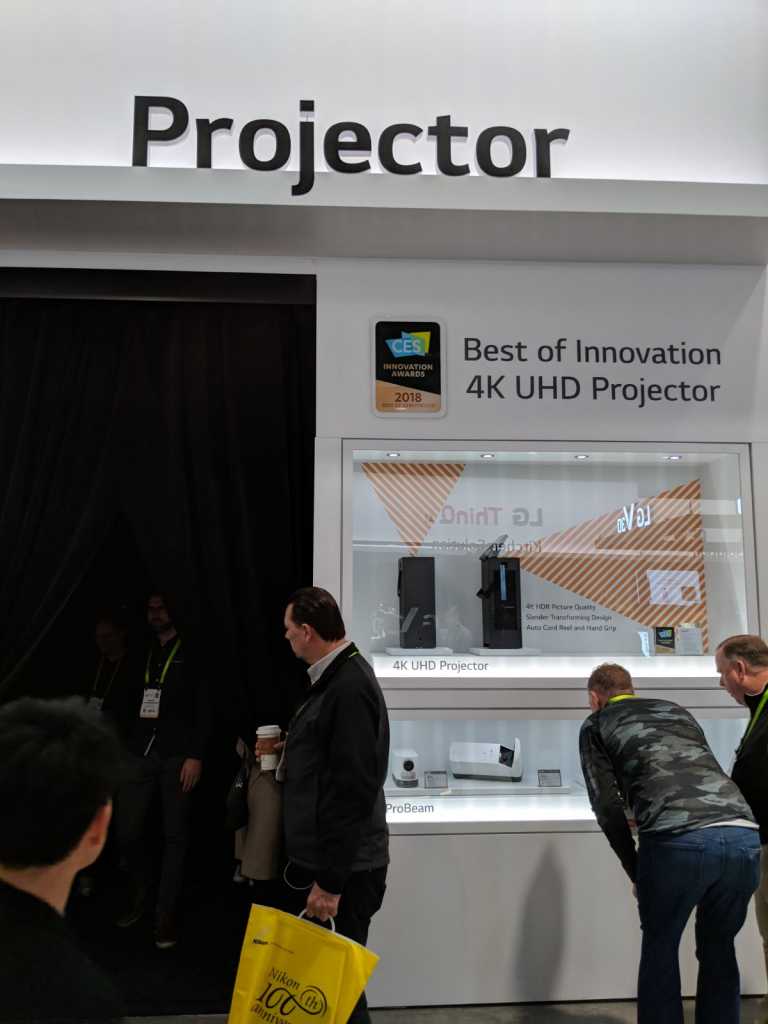 Projectors of all types and genders - both for professionals and commercial needs, and for those for whom this is their first experience in the field

The Ultra Short Throw technology in which the projection is reversed, from a lamp on a prism to the selected wall, does not cease to surprise us,LG Declare the ability to display an oblique image up to 120 inches from a distance of only 20 centimeters from the wall, when there is no need for complicated hanging from the ceiling or fear of hiding the display (except for those centimeters between the prism and the wall itself). Amazing - and now you can only dream that competition in the field will allow us to get a little more popular prices one day. 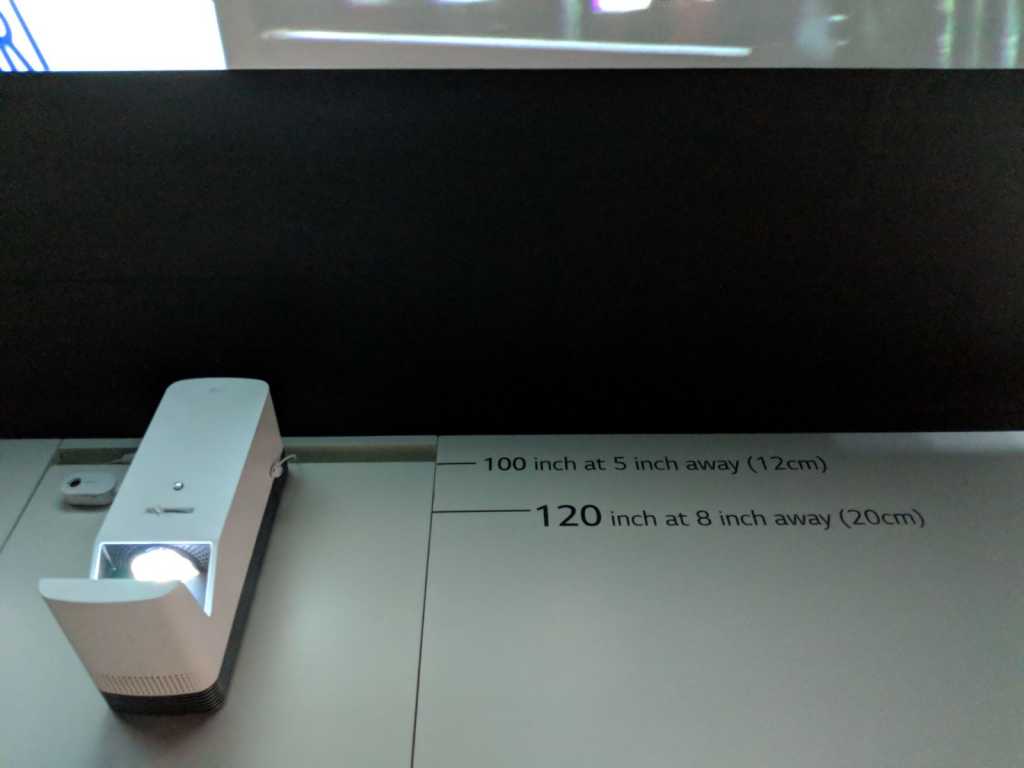 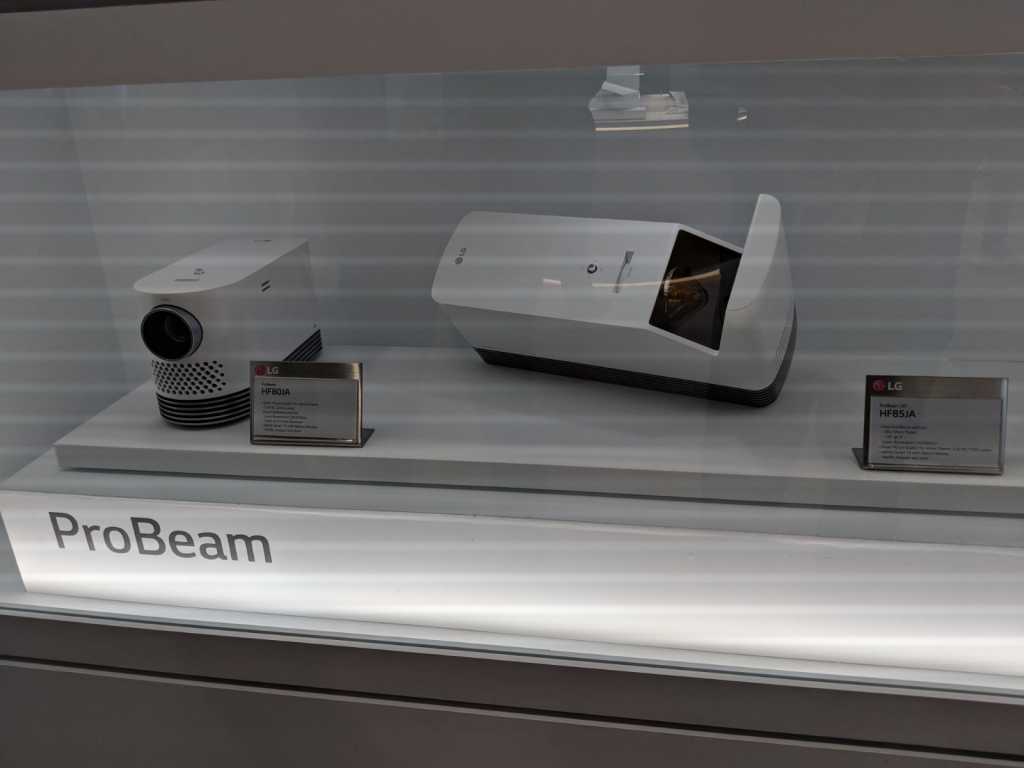 The latest impressive technological refinement has been presented behind closed doors to individuals only, which probably implies that it is quite far from being ripe for launch, but it still deserves a place of honor in this article - TV OLED Stunning 65-inch flexible, which can be simply "hidden" by rolling into a mechanical stand that includes all the required electronic components, much like a display screen of projector.

This technology is amazing not only because of its application for home TVs, but also because it gives a hint of what will be available in the world of mobile smart devices somewhere in the future - just imagine a kind Unlocked Consisting of two parts, its screen can be increased by pulling to the size of a tablet, and return back to dimensions Unlocked Once it's time to put it back in his pocket. The possibilities here are truly limitless.

Keep following us for more information, photos and impressions straight from the CES 2018 show!