Surface: Microsoft Unveils a Couple of Its Own Tablets 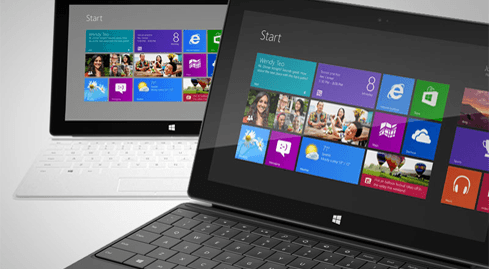 Two and a half years after the company's CEO Steve Ballmer held the tablet in his hands The HP Slate (Does anyone still remember him?) And declared, with his characteristic enthusiasm, that this is the next big thing - it seems that Microsoft is ready to try and conquer the world of tablets once again, now with Operating System Which was specially designed and designed for them.

Surface for Windows RT, as the name gives away, is based on the windows system In the ARM version And offers a 10.6-inch "HDT resolution" ClearType screen (we bet on the standard 1366 × 768), a quad-core Tegra 3 processor from NVIDIA (probably like the one found inTablet 600 Presented by Asus At Computex), 32GB or 64GB storage capacity, microSD card slot, USB 2.0 connection, Wi-Fi connectivity with an array of 2 × 2 MIMO antennas, battery Of 31.5 watts and more.
As mentioned, Windows RT will not support software and applications created for an environment Windows But will also contain a set of software Office Created especially for her, as well as a classic "desktop" environment in addition to the metro environment, which can provide those who are not looking for a work horse but a leisure device.

Surface for Windows 8 Pro is the most impressive tablet of the two, with a "real" Windows system that will support all existing and based software, Core i5 processor Of the Ivy Bridge's ULV family, An 10.6 ClearType screen, and a generous FullHD resolution, volume storage Internal 64GB or 128GB, microSDXC card slot, 3.0 USB connection, mini connection DisplayPort, An 42-hour battery and more.

Both tablets have a built-in kickstand, and alongside them Microsoft will offer a pair of "smart" magnetic covers - one 3 millimeters thick with a capacitive touch keyboard and multi-touch support, and the other 5 millimeters thick and includes a full physical keyboard and touchpad. Next to the Surface for tablet Windows The 8 Pro will be offered even an optional touch pen.
A combination of the rear stand and one of the intriguing keyboard covers creates a small mobile workstation that looks like the spiritual successor of the various netbooks, although Microsoft is really No The first Which displays Such a device In The Last Weeks.

It will be very interesting to see how Microsoft will deal with competition from manufacturers such as ASUS and Acer Windows Their own 8, and how the new operating system and its attendant will face Dark And Google in this glittering market.