The new Chinese meteorological tablet will try to beat the OnePlus One and theiPhone 6 Plus at the same time with specifications and pricing similar to those of the first, alongside dimensions and aesthetics similar to each other

In the middle of the year 2014 we all appeared to see a new and ambitious venture season named OnePlus making 'Xiaomi move' And launches a quality smartphone with all its limbs, At a price close to half that of its competitors. Now, the creators seem to have turned around - andXiaomi Is the one that launches a new device that looks like a direct competitor to the E-OnePlus One. Too little and too late or a brilliance that came just at the right time? You are welcome to continue reading and judging for yourself.

The Xiaomi Mi Note offers everything you would expect from a leading flagship device in 2014 - a 5.7-inch screen with a 1920 × 1080 pixel resolution with a wide range of colors covering 95 percent of the NTSC facility, chip Snapdragon 801 is a quad-core X-ray processor with a maximum 2.5GHz, 3GB RAM, built-in storage of 16GB or 64GB (no slot to expand, unfortunately), 13 rear camera based on Sony's popular IMX214 sensor with optical image stabilization, 4 front-end megapixel camera based sensor and ultra-large pixels A-la HTC's Ultrapixel technology, a system Android KitKat with MIUI 6.0 interface Xiaomi And a fast-charging 3,000mAh battery that provides an 50 load percentage of about half an hour. 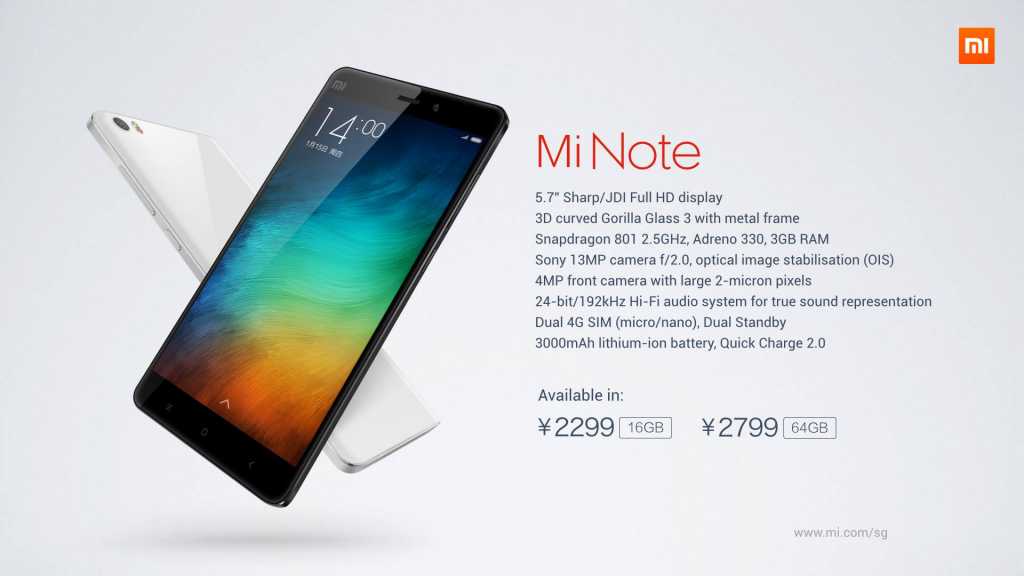 One of the features that sets the Mi Note apart from many other Chinese devices, as well as most of Xiaomi's previous devices, is a design that transmits impressive quality with a metal frame and Gorilla Glass cladding three front and back - with the front facing 2.5 'on the sides and the back '161D'. Add to that a weight of 6.95 grams and a thickness of 6 millimeters, both lower than the features of the iPhone XNUMX Plus which offers almost the same size, and one can begin to understand why the Mi Note is also defined as direct competition For Apple's successful tablet.

The Mi Note is probably the most polished device of Xiaomi So far, but it will probably also be its biggest and most challenging test - if in the past the Chinese manufacturer offered a cost / benefit level that no other well-known manufacturer could match, now the Mi Note comes as a competitor toOnePlus One has been available in the market for several months with a price tag, specifications and quality very similar. Now it will be an examination of the brand that the company has created for itself in recent years, and whether masses of consumers really trust it and love it or have they been there in the past just because of the winking prices.

The Mi Note can be ordered In oppomart Starting with the January 20 initial cost of $ 400, with international shipping option

What do you think of the Mi Note,OnePlus One? Which one is the most cost-effective performance machine in the smartphone world right now? Tell us in comments.