DirectX 12: The future of gaming is going to change, for the better • HWzone

After we have already received several insights into the performance of the new DirectX 12 technology from Microsoft in collaboration with AMD andNVIDIA, A new test shows us how extensive efficiency and improvements can revolutionize gaming

Will DirectX 12 revolutionize the gaming market? In collaboration with Oxide Games and using the company's graphics engine, Star Swarm, Microsoft enabled the site Anandtech To seriously examine for the first time the capabilities of the new technology. in short? Not only is the improvement between DirectX 11 to 12 system performance is very significant, but also the efficiency of these systems will surprise you. 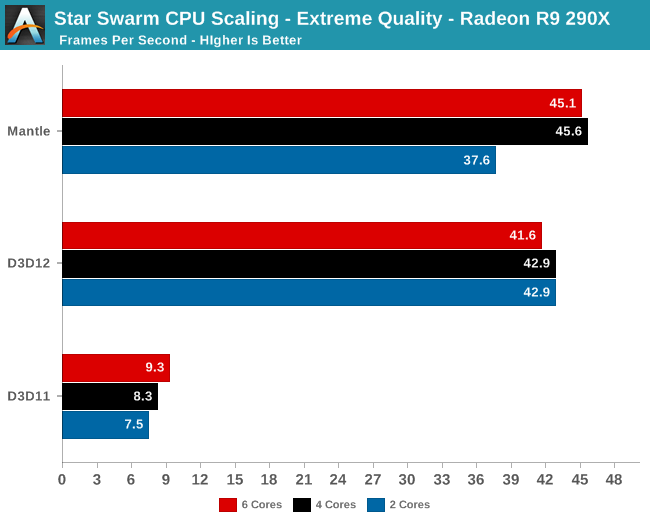 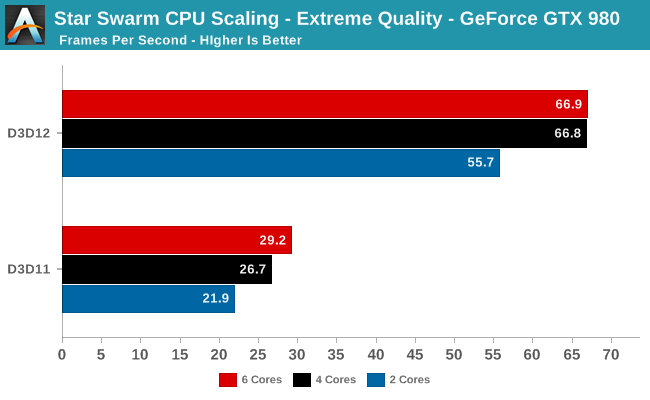 Comparison of system performance with a different number of active cores when using the R9 290X card on the right andGTX 980 Left (source: Anandtech)

As soon as the test begins, with the basic test of the effect of the amount of CPU cores on the system performance (using the GTX 980 card to the left and the R9 290X on the right)DirectX 12 integrated in the Star Swarm game is much more efficient than the interfaceDirectX Previous 11. As you can see, the difference in performance between using six-core versus quad-core is minimal and negligible,DirectX 12 relies a lot less on the processor and much more on the graphics card in the system, a blessed optimization that will enhance the capabilities of most of the computers currently on the market. This efficiency is also reflected in better distribution of load on several cores at the same time, in addition to more efficient processing of information and thus also lower latency. A more significant decrease can be seen when using only two system cores, which is the limit at which the efficiency of the C-DirectX 12 can affect the results.

Side efficiency, a significant (and even dizzying) increase can be seen clearly here as well. If we look at the performance of the GTX 980, we will notice more than twice the efficiency of the DirectX 11 technology in any number of active CPU cores, while the same thing (but much more extreme) can be seen in the test with the R9 290X. AMD Radeon cards are known to perform poorly when using DirectX11 compared to the NVIDIA tab in this test, but the use of the new version of the technology, in addition toMantle drivers Of the company astronomically raises the performance of the system, with cases showing a fivefold increase between system performance with Mantle drivers compared to DirectX 11. Another interesting point that comes out of all these performance tests is that the Mantle chipset AMD Provide higher performance thanDirectX 12 itself, which shows the high efficiency and extensive optimization of the company with a tab.

In terms of power consumption of the experimental system when using different technologies seems to be slightly disappointing results. The Mantle driver and theDirectX Although the 12 delivers improved performance on any performance test against X-DirectX 11, but the power required to do so is higher than the previous generation of the interface, with a significant change of almost 20 to the R9 290X and 22 to the GTX 980. In addition, the Mantle driver consumes the most power in this test, with more than 26 more than the power consumption of the card with the M-DirectX 11. 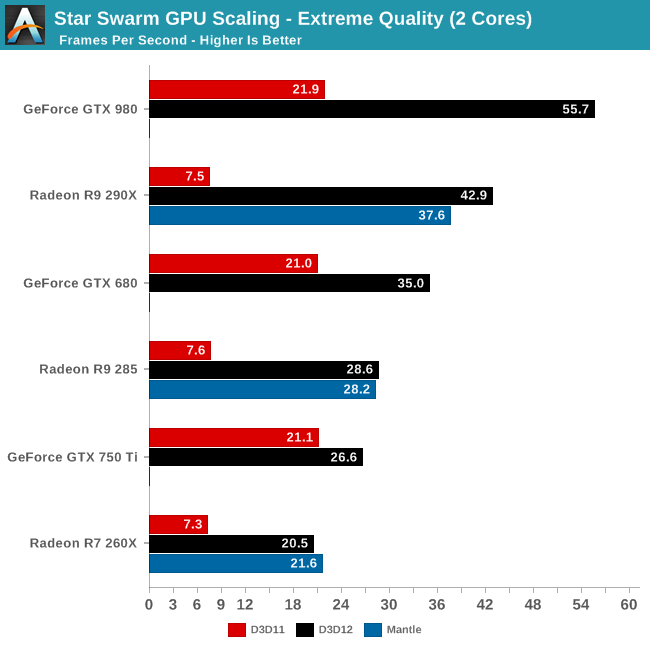 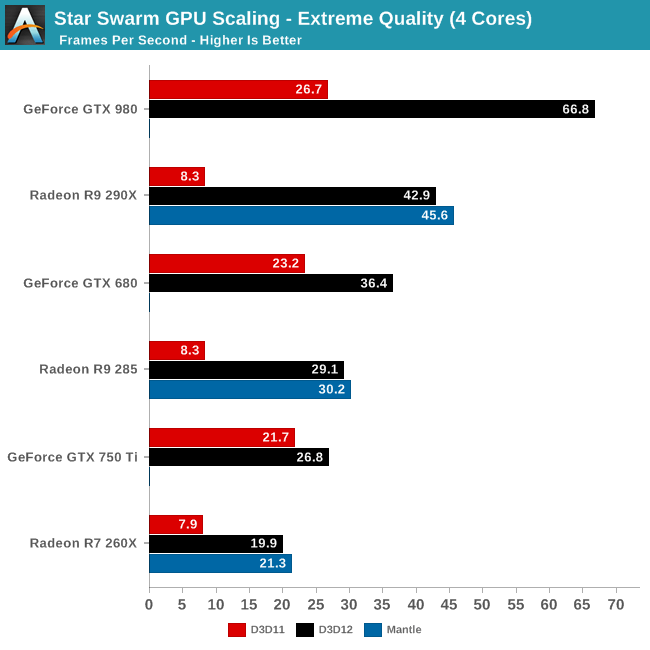 Even in comparison between all the video cards of the test can immediately see the difference in performance between the use of technology -DirectX 11 technologyDirectX 12 and Mantle. With the Extreme settings that fully load the system, the GTX 980 card is placed first on the list (both on two-core and four-test) with 26.7 frames per second when using theDirectX 11 vs. 66.8 frames per second with X-DirectX 12, improved by 2.5 (!!).

The R9 290X card sees more than five times the increase between DirectX12 technology and 11, with even higher performance with the Mantle driver, a trend that continues throughout the experiment with a card AMD. The same improvement is seen when using only two CPU cores, but the number of frames per second does decrease compared to the use of four CPU cores. Here, too,DirectX With low processor reliability and higher reliance on the graphics processor, 12 is performing very well, along with the dramatic increase in performance. 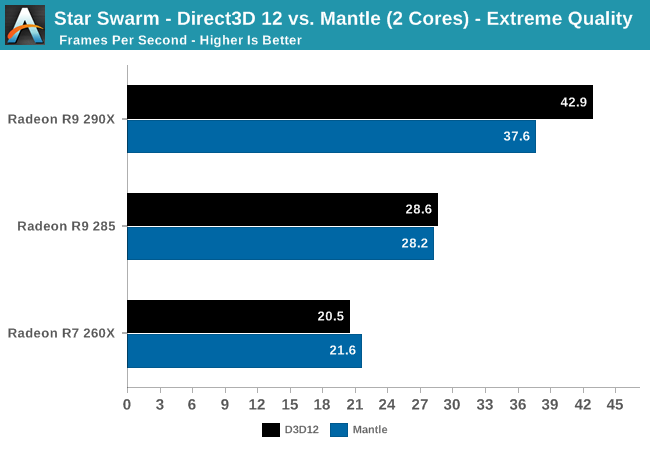 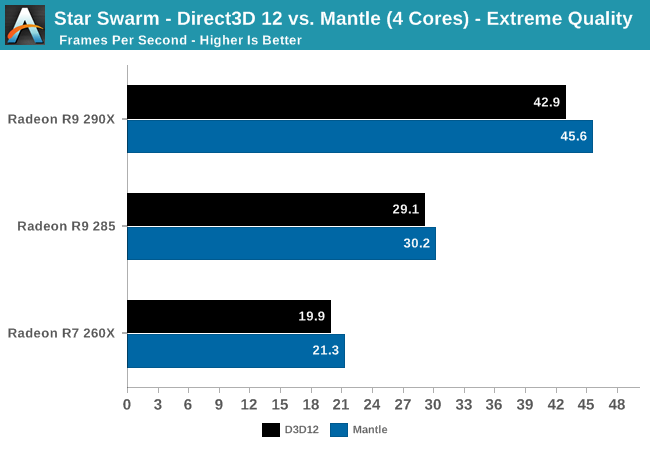 And if we isolate the performance of the Mantle driver against DirectX 12? The advantage of AMD The performance of the Mantle drivers is also reflected here, with an average increase of 5.6 in the number of frames per second the system is capable of delivering. If we look at the same comparison but with only two active cores, it seems that the Mantle drivers provide better optimization for the AMD In most situations, these drivers are not as effective as theDirectX 12 for the CPU bottleneck, which is expressed in lower frames per second on most cards. 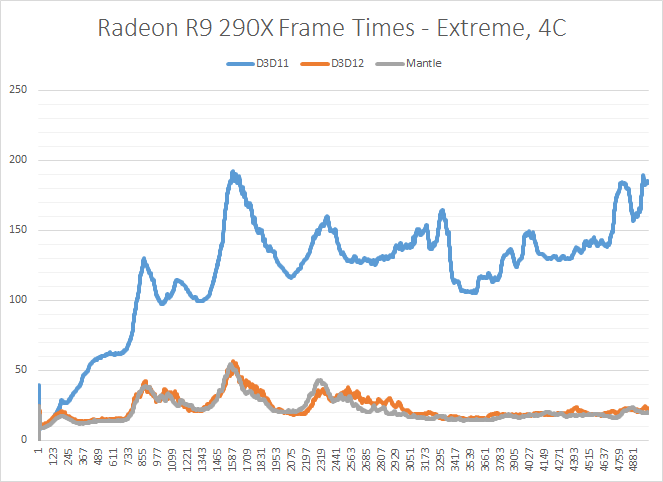 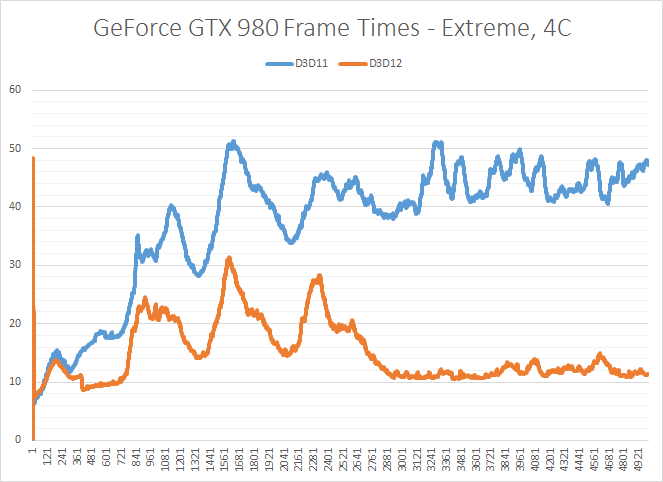 To summarize the findings, we presented you with a graph that clearly shows the superiority of theDirectX 12 and Mantle-front DirectX 11. The graph, which shows "Frame Time" (the time it takes for each video card to produce and display a new frame), clearly shows us the reason for the poor performance of theDirectX 11 against its more modern competitors. Not only are the frame rates of the old technology higher (and thus the number of frames per second is lower), but they are also much less orderly and consistent compared to DirectX 12 and Mantle, which display very low Frame Time thus Performence Higher.

Of all these tests, we understand that DirectX 12 technology is much more efficient than the previous generation of the interface, with a lower reliance on the processor and better use of existing hardware on today's computers. Until the launch of Windows 10, To bring with her The DirectX 12 technology for the masses, we'll settle for theImpressive performance tests Which will make us drool about the future potential of gaming.