You have collected the free ones we told you about And do you feel like more games that will enrich and upgrade your free time? You can find them in the latest packages on the websiteHumble Bundle, Which include a wide variety in the best tradition and some quite popular names at prices that are hard to find elsewhere on the net.

Team 17 Greatest Hits Package Celebrates (slightly late) the 30th anniversary of the existence of the American distributor and developer, with up to 29 items, full games and DLC packages for them, for a total price of $ 20 or about NIS 65.

The offer, which will be available until Wednesday, September 22, includes Worms Rumble, the newest in the famous Warrior Worms series, the Aven Colony management game, the My Time at Portia adventure and construction game, the addictive management games The Escapists and The Escapists 2 and more - 16 Complete games in total, along with 11 small DLC packs for some of them and 2 more coupons for a future discount on the purchase of Hell Let Loose and Hokko Life games through the Humble Store.

package Available until Friday, September 24, offers another opportunity to dive into the deep and mesmerizing worlds created by Telltale Games until the moment it had to close its doors - with all the works based on The Walking Dead and Batman in one place, plus The Wolf Among Us, for the price Of $ 12 or a little less than NIS 40.

In return for your payment you can first of all support the Wikimedia organization, which is known to be behind a Wikipedia project that should not be presented to anyone - and then also receive copies Steam Of 5 different seasons created based on the comic books The Walking Dead, a pair of full seasons inspired by The Batman comic books and an entire season inspired by the Fables comics, along with another pair of Batman DLC additions and one DLC episode for The Walking Dead.

Be the Bad Guy Package Will be available for an additional 11 days from the time of writing, with six titles for $ 13 or just over NIS 40 and only NIS 7 per item on the list - which includes first and foremost the updated and complete versions of Mafia 2 and Mafia games 3 Famous.

In addition to the open world crime games you get access to the Dungeons 3 management game, which is the latest episode in the series created as a homage to the classic Dungeon Keeper, the Legend of Keepers management game that offers a battle system in turns - and the infamous Postal and Postal 2 duo, with the first It is in its modern Redux version and the second also includes the Paradise Lost expansion pack.

Did you collect all the packages? Great - Now you can take a minute and check out the 12 games available this month on the Humble Choice service, which you can join for months at $ 12 (which can be canceled at any time, with no obligation).

This selection includes the fresh Roguelite game Neon Abyss which enjoyed 87 percent positive reviews onSteam, A two-dimensional platform game called Narita Boy launched less than half a year ago, a crazed action-survival game called Atomicrops introduced about a year ago, the stylish West of Dead tactical action game also launched in 2020 and the PGA Tour 2K21 golf simulator, for amateurs The genre. 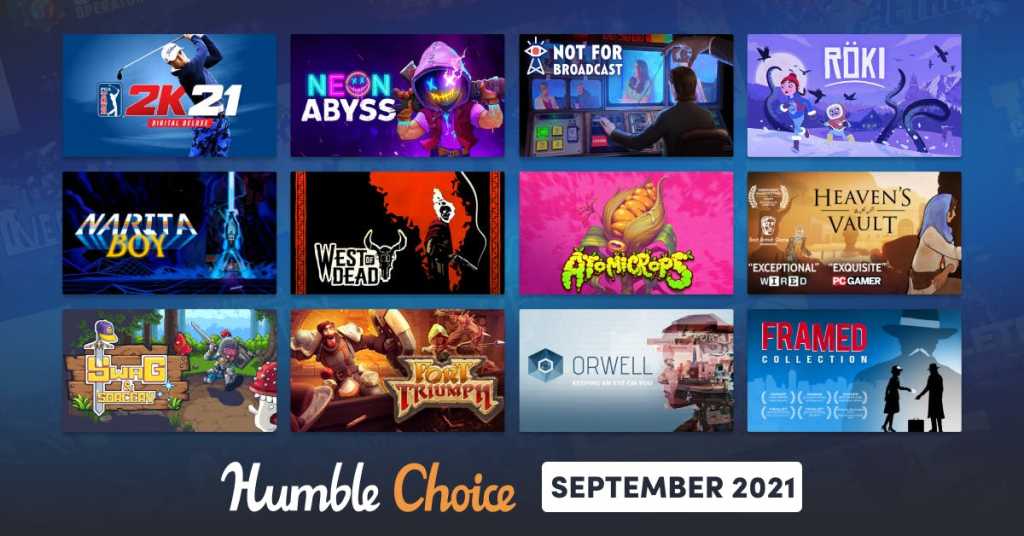