Get lost in Wild West of Rockstar Games • HWzone

Red Dead Redemption 2, the new giant project creators GTA, Justifiably justifies any compliment and every word of sympathy you've heard and heard about, and is one of the greatest achievements in the whole gaming world

If you are a fan of the Rockstar Games,Red Dead Redemption 2 Because you've heard it's "GTA with horses", so let's, like that, start adjusting expectations. Red Dead Redemption takes place in a technology-free period where everything is calm, slow and people take the time.

So although there are quite a few crazy action sequences in the game that make you feel like you're part of an old western, you spend most of your time doing a lot more everyday activities like riding your horse while you stare at the beautiful landscape. So if you're ready to take the gear, for one of the best gaming experiences of all time, then stay with me and let's continue.

Well, Red Dead Redemption 2 is a trailer for the first game from 2010. Which is good because if you did not play the original game, you will not feel that you missed something, and if you did, you will get the full picture of the events preceding the first game.

We play as Arthur Morgan, number 2 in a gang of outlaws led by a charismatic guy named Dutch van der Linde. The game begins when the gang flees to the mountains after their robbery has gone completely wrong and all their money is left behind.
Now they are trying to understand what to do, and how to continue to exist in a world that is becoming more modern and repulsive of lawbreakers like them.

In the meantime, because the group needs money to survive, as Arthur you will have to donate your share and join your friends to rob trains, houses, chariots and other creative ways to get quick money. The other guys in the gang are characters of character, the best dubbing and acting, so that every robbery becomes pure fun. 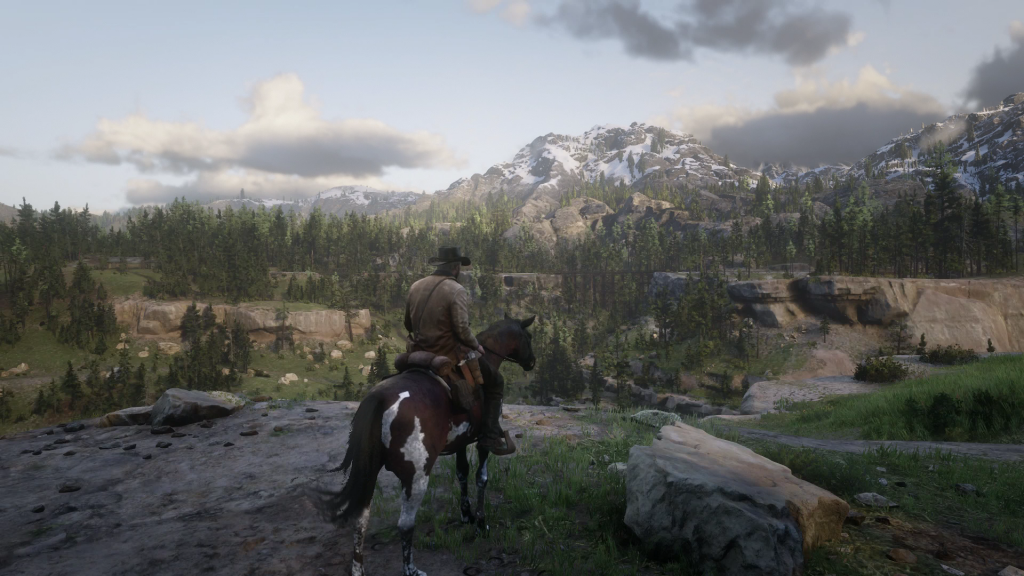 You can also spend time with them outside the main tasks, just sit in your camp, go out to the capital in a pub or for smaller, more personal tasks to get to know them more.

Arthur himself is not just a rough robber. Is a much deeper figure than it looks on the surface, and in fact probably one of the best characters ever written. He is a person torn between his loyalty to Datche and the rest of the gang that is his substitute for the family, and the inner feeling that he is not sure Datz knows what he is doing and why he himself continues with this violent life. 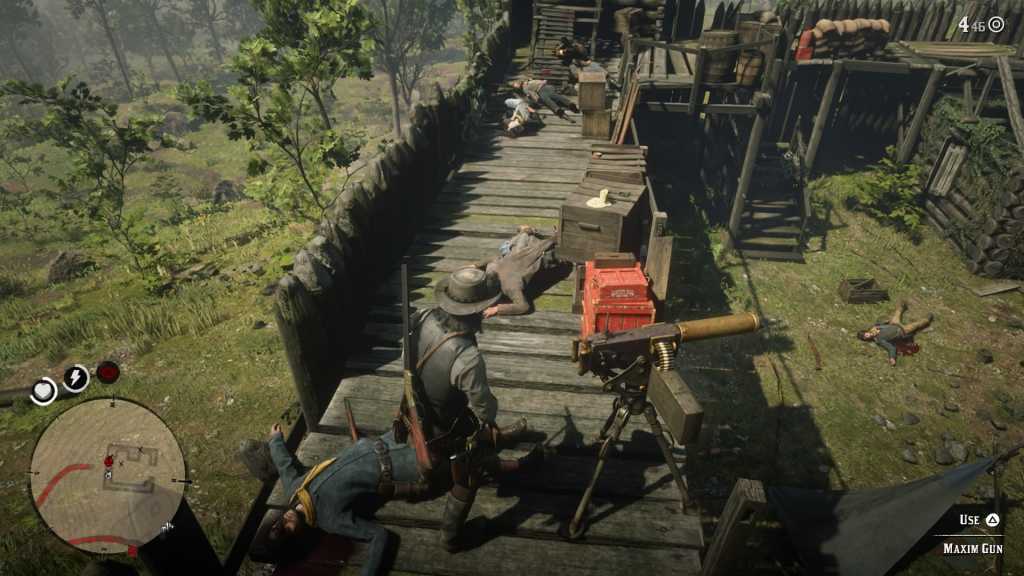 Anyway, other than your obligations to a Datch gang, you'll be free to hang out in the fictional late-nineteenth-century US, and this is where the game is particularly outstanding. The game is full of so many things to do, and builds such a realistic world that you will no doubt feel like a kid in Luna Park, who every second turns his head to the next interesting thing he encounters along the way.

Throughout the giant map of the game, you will meet colorful, character-filled people who will send you to original missions that will make companies like UviSoft To be ashamed of their dry side missions. 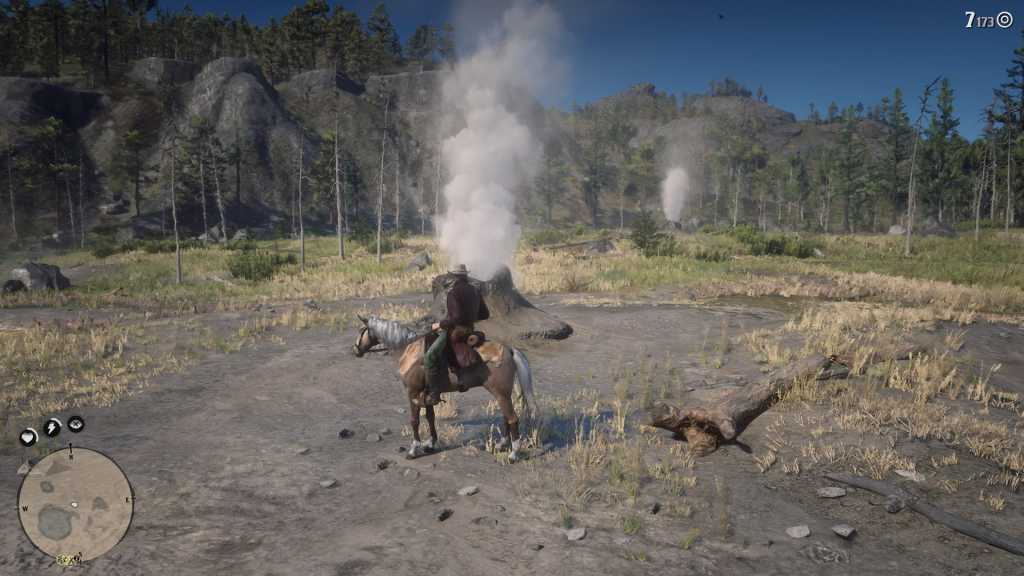 You can also look for wanted criminals and get money from the sheriff's office to go out for another hunt Animals And hunt, hunt for ancient treasures using old treasure maps, play poker, dominos and other side games, and of course if you get bored and want to feel even more like an outlaw, put a mask on your face and rob anything you can.

Rockstar has managed, amazingly, to build an organic world that feels alive and breathing.
If you travel in nature, you will meet dozens of types Animals That behave like Animals Real. If you pass a farm, you'll see people working their land. If you come to the big city, you'll see an industrial area, a tram going around the city, theaters, people going shopping, social activists and more. When you are on the road, you will meet people who go hunting, a police that leads criminals, or just people who transport goods. 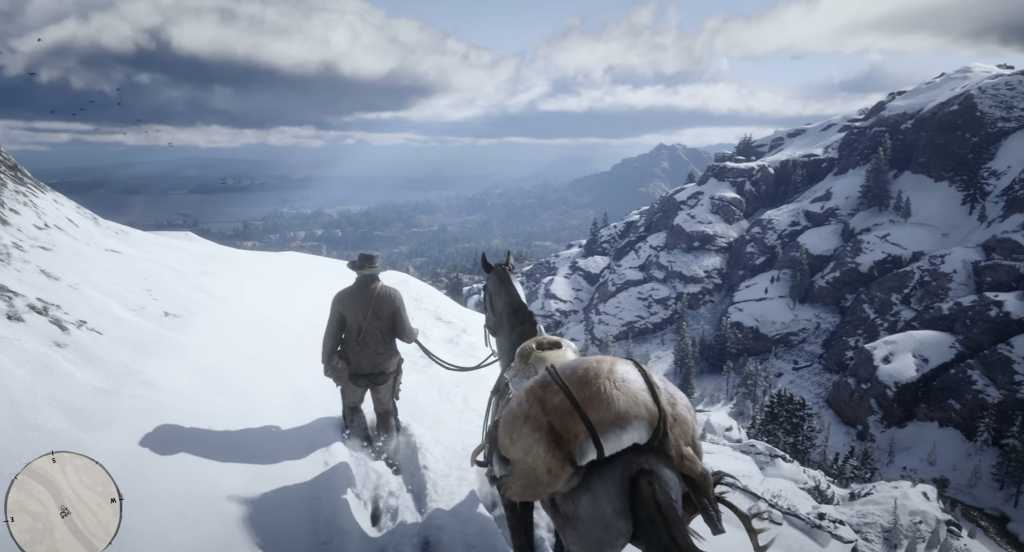 If you choose to talk to them, you will find that Arthur's reactions and the characters around are natural in a way that I have not yet seen. It's not just their game and dubbing, which is just as great. Usually conversations between the main character and just the characters feel programmed and repeated, but here are the natural reactions of people who feel real, and who even remember how you talked and acted to them in the past.

You can find the same crazy level of detail in the rest of the game. And here are some little things that occurred to me as soon as the review was written: If you ride close to a tree, Arthur will bend over to avoid being hit by the branches. The horses are in need. After rain, the soil will become muddy, and gradually dry out over time. On muddy ground and snow you can leave a trail and they'll mess up Arthur's clothes and his horse's legs. Arthur can lose weight and get fat depending on how much he eats and whether he does physical activity like running or swimming. I could have gone on like this forever, but I'll let you discover these little details all by yourself. 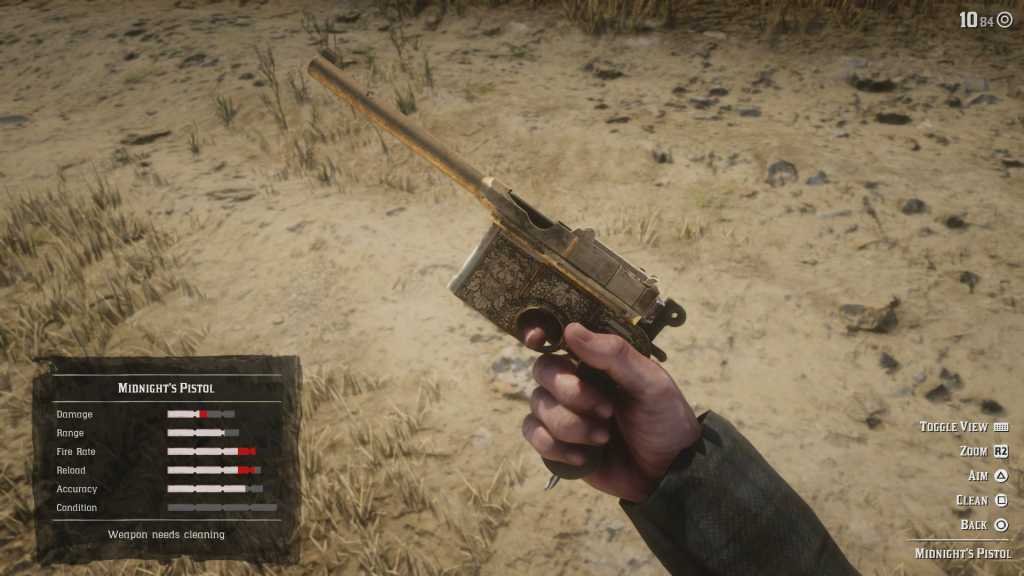 But with all this realism comes a price. Because it affects not only the world around but actually the gameplay. Arthur should eat and sleep, and feed his horse. He also needs to bathe from time to time, otherwise people will start to get away from him.
In addition, his clothing should match the weather. If you get to a snowy area without a good coat, Arthur's endurance will hurt and he will lose it faster, the same if he wears fur in a hot area.

Some people will not connect to this part of the game. But as someone who does not suffer from gaming survivors - here it is performed not very rigidly, which I think actually adds to the experience.

Like I said at the beginning, this game is slow and takes time. In other words, there's nothing to worry about. It's still Rockstar, so there are quite a few pieces of action and shootouts that will not embarrass a good Western.
The shooting system is comfortable overall, there are several types of weapons that behave differently, and there is a mechanism called "Dead Eye" that will allow you to momentarily slow down to aim better. In addition, the game occasionally adds a cinematic section to your successful shots, which adds to the atmosphere that you are the hero In the movie Westerns. 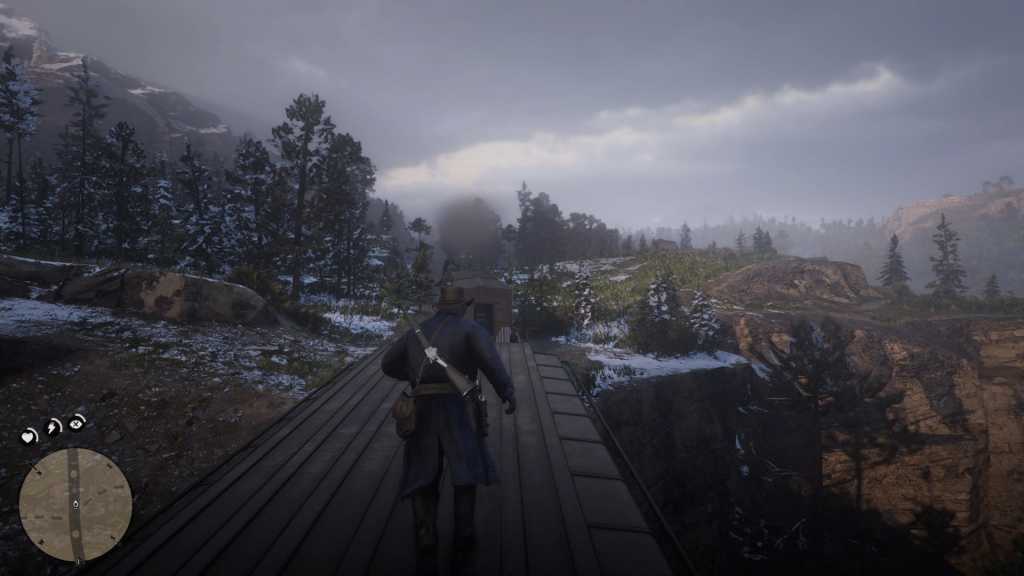 But the action snippets are only part of the huge amount of things called "Red Dead Redemption 2," which is why people who must act all the time will probably be less enthusiastic about it.

But as much as I really fell in love with the game, I must point out that it also has quite a few problems. No problems breaking the game or anything, but things just could have been much better.

I will ignore the bugs and graphic slabs you may encounter here and there, because this is the domain of all world games open wherever they are. Let's start with the terrible game menus. They are super slow, takes years to get out of them, and the fast menu is very intuitive. 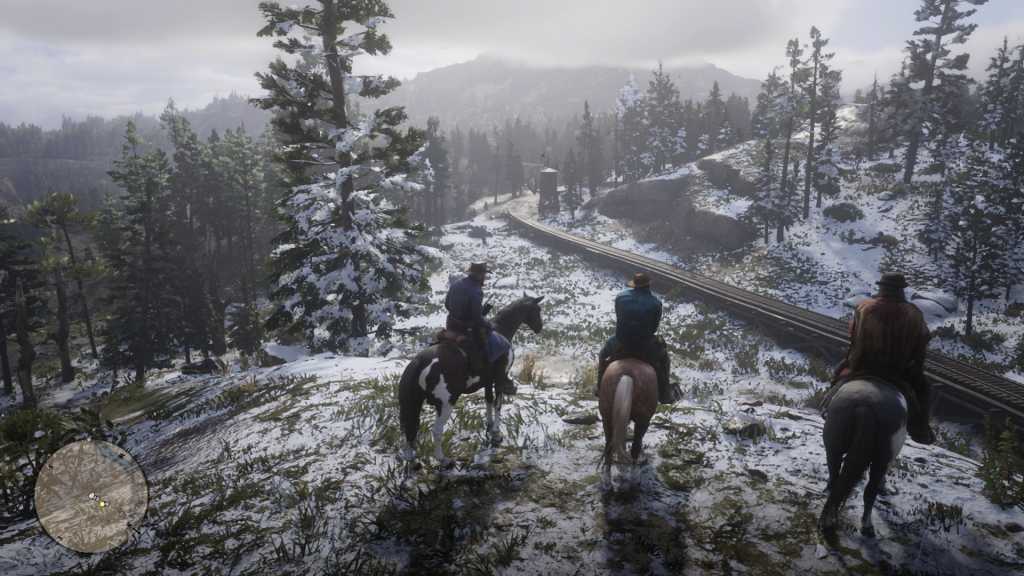 Second, controlling your character and your horse is a little rough and strange. And often you will find themselves making a gesture that you did not intend to do and mistakenly trample someone, or spend an hour around an object in an attempt to take it.

Another thing is that from time to time when you want to rest and set up a camp, a message will appear on the screen that there is currently activity in the area so you can not do it. It happened to me that I walked for long minutes in completely dead areas, without enemies, Animals Or people in the area, and I still got this message.

And one last thing that stands out especially after doing some major tasks - there's nothing to do with money in the game. Main tasks, and maybe some casual treasure map will satisfy all your cash needs. And after we got you some good weapons, and maybe some Sets Of clothes and a new saddle, you will not really have more to spend on. It's a little sucks, because in fact, except for the fun of it, you do not really have a reason to try and rob people to kidnap the police, because what will you do with the money? 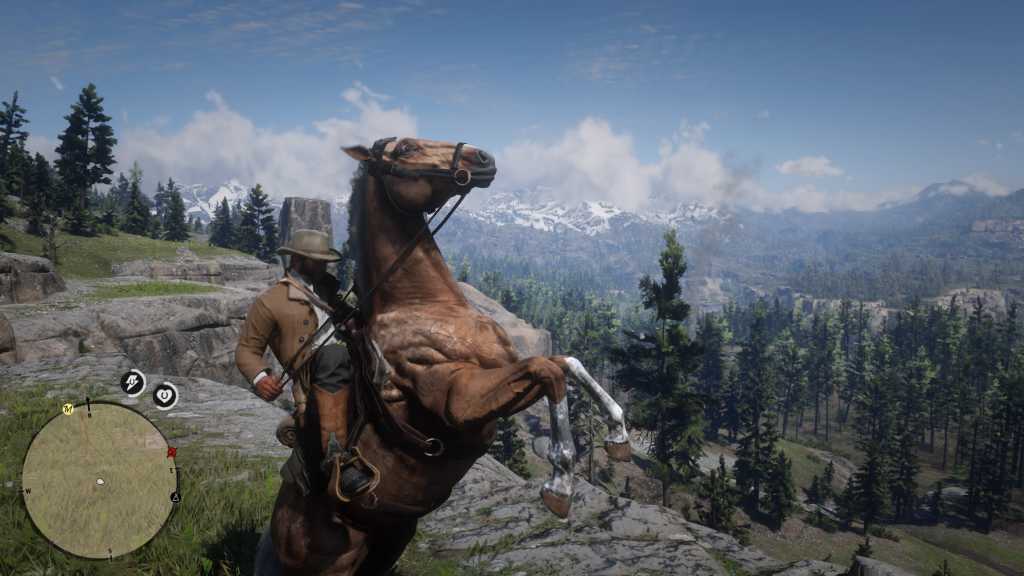 But, as noted, these are not too serious problems, and they certainly do not cloud Roxstar's achievement.

So, Tachles, I could go on talking a lot more about the game. That his graphics are beautiful, that the lighting is crazy and turns every second of the game into a picture that can be framed, the dubbing, the writing and the excellent game of the actors behind the characters, the soundtrack that really suits the atmosphere. But if I keep going, we'll have to stay here for a long time. So I'll spare you, and I'll say that in my opinion, the unbiased is an amazing game, and a new milestone in open world games. Anyone who does not try it at the very least, I think is going to miss a once in a lifetime experience.


Wait, there's more!
Join To the group of zon And you can receive exclusive updates on various offers on the net, share content that you find interesting, consult with members of the site, and more - Join now!
Tags
Rockstar 2018 GAMES
Share
Facebook Twitter LinkedIn WhatsApp Telegram