By
operational Steam: The sixth day
We crossed the middle line - will the second part of the operation days be more successful? We'll wait and see.
And today: the role players who will acquire the Skyrim In the coming hours they will be able to do so In ILS 150 (Instead of NIS 225). Other role players may prefer the Risen, The spiritual sequel to the Gothic series, on the face of it - In ILS 57.
Strategists will be able to choose between Plants vs Zombies, The original (and addictive) strategy game of PopCap For thirteen shekels, And between package Company of Heroes, The strategy brand in World War II, which includes the original game and its two expansions, in38 NIS. You can also purchase the original game For less than eight shekels (recommended!). 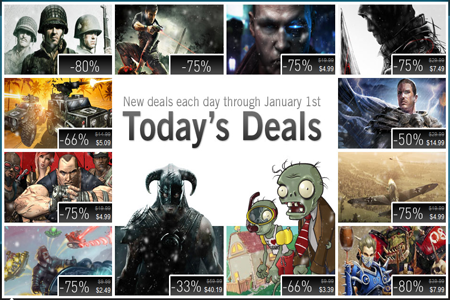 Anyone interested in action and shooting can find the Borderlands, The successful action-role-playing game of Gearbox, In ILS 19, Or stock up on one of Tom Clancy's games (most of them games Splinter Cell, Rainbow Six או Ghost Recon) At prices ranging from ten shekels to a little less than thirty.
Simulators are also being represented today. Wings of Prey, The combat simulator that takes place during World War II, is offered for sale in19 NIS. It looks not bad, even for those who do not usually enjoy simulators.
As usual, we invite you to update us on your recent purchases here in comments or In our gaming forum.
Tags: SteamSpecial Deals