4 Update: We know most of you are busy with Amazon's huge (or not so huge?) Deals on this day - but also The operations of Green Man Gaming Continue, under the slogan 'world domination', and with much Special Deals Great for games that are less familiar, but equally worthy. We have collected eight suggestions that you will not want to lose:

like before, Also this time all the excellent prices are after entering the coupon code 'GMGSUM-MERSAL-E20OFF', Or coupon code 'DEALZO-NGMGSA-LESVVC', Which give 20 additional discount rates on the existing price. Pleasant shopping! 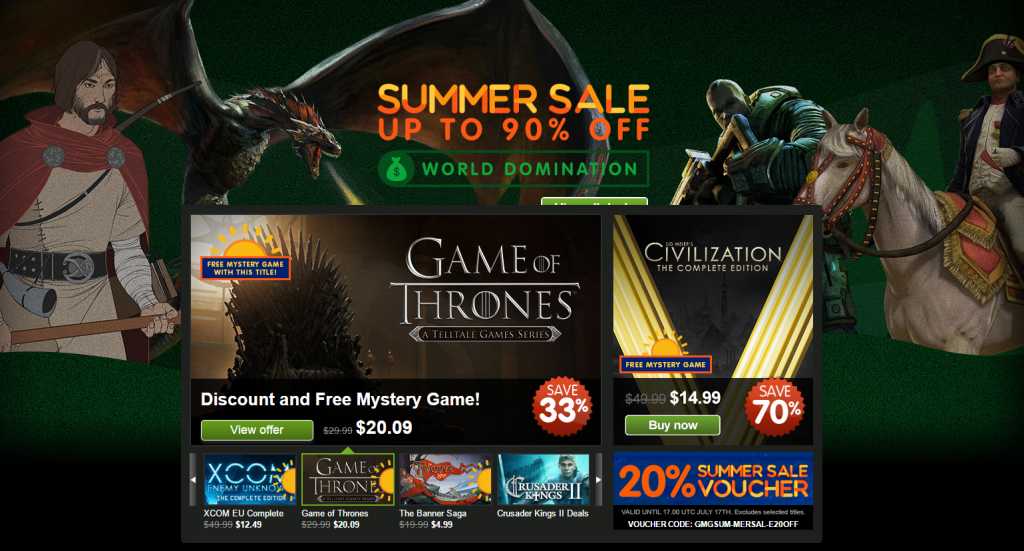 3 Update: Thursday of promotions - This time in the field of nightmares (or horror, if you will). This time, too, we've collected seven suggestions you shouldn't miss:

like before, Also this time all the excellent prices are after entering the coupon code 'GMGSUM-MERSAL-E20OFF', Or coupon code 'DEALZO-NGMGSA-LESVVC', Which give 20 additional discount rates on the existing price. Pleasant shopping!

2 Update: Operations at GMG Enter the fourth day, this time with an emphasis on simulation games of all kinds. So as always, so that you do not get lost, we have collected the five most interesting suggestions, in our opinion:

pay attention - As before, this time too, all prices are excellent after entering the coupon code 'GMGSUM-MERSAL-E20OFF', Or coupon code 'DEALZO-NGMGSA-LESVVC', Which give 20 additional discount rates on the existing price. Pleasant shopping! 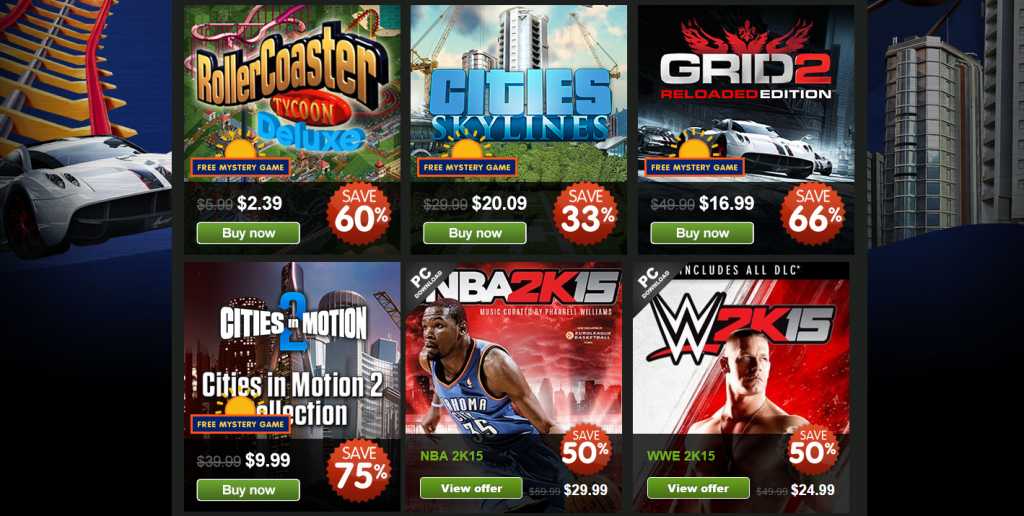 updating: GMG's surprising operations continue today, This time marked by adventure games and quests - And we don't necessarily mean Monkey Island and its friends. So that you don't get alone, we've compiled eight interesting suggestions for you to consider and consider:

All prices are indicated after entering the coupon code 'GMGSUM-MERSAL-E20OFF' Which gives 20 additional discount rates on the existing price. Pleasant shopping!

Original Article: After the Humble Store, Also the Green Man shop Gaming Get into high gear with Special Deals According to areas and topics that will change daily

As you must have already understood, we are Lovers operational Gaming Online. Very loving. Therefore, we are very pleased to see that even after the end of GOG and Steam's grandiose promotions, there are those who continue to indulge us in quick deals - and this time it is the popular third party Green Man Gaming, Which is launched in summer campaigns in a slightly different format Special Deals According to various topics - every day, the best of tradition.

Offers currently available Deal with the ultimate enemies that everyone likes to eliminate (after the Nazis) - zombies. Please note that in addition to the promotional prices listed on the site, the coupon code 'GMGSUM-MERSAL-E20OFF'Will provide you with an additional 20 discount, and make some of the offers much more rewarding.

The most intriguing operation within the current day is no doubt about Dying Light, The successful and successful zombie creator of Dead Island, launched at the beginning of the year and now available (with a discount of 25 and a further discount of 20 per cent on the balance with the coupon code) at 36 dollars only, the lowest cost we have encountered so far. It is highly recommended to take this opportunity, if you have not already done so.

Other impressive promotions include a bundle of a pair of Left 4 Dead series games at only 6 dollars, the successful indie game Killing Floor at 4 Dollars, the first season of the adventure games The Walking Dead from Telltale Games at 5 Dollars, the second season of the same series of games Great for 6.8 dollars - and also Dead Rising 3 in the Apocalypse Edition, at a cost of only 16 dollars.

If this is not enough, GMG also has some very interesting proposals in the framework Her VIP Club (To which you can sign up for free) - The Witcher 3, For example, is available for purchase at half its price, 30 dollars only, plus Call of Duty: Advanced Warfare is offered at 23 only, the Project Cars racing game carries a price tag of 35 dollars, and Dark Souls 2 in the improved version of the First Sin Sin You have 25 dollars only.

We will continue to update you with Special Deals More at GMG in the next few days, while you are invited to tell us about more equal offers you may have found and we forgot to mention. Enjoyable shopping!


Wait, there's more!
Join To the group of zon And you can receive exclusive updates on various offers on the net, share content that you find interesting, consult with members of the site, and more - Join now!
Tags
Steam operation Special Deals
Share
Facebook Twitter LinkedIn WhatsApp Telegram

Now on the net: Fresh racing game at a very lucrative price

Now on the net: Fresh racing game at a very lucrative price