Blossom: Get to know the most promising Action RPG games for the next few years • HWzone

Many players, especially the older generation of us, remember the excitement surrounding Diablo 2 when it released in 2000. The sequel to the series, and the first serious one after a short first and fairly content game. Diablo 2 has re-dictated what can be done in a game with an unlimited amount of time, the ways in which you can develop and invest in character and possessions. 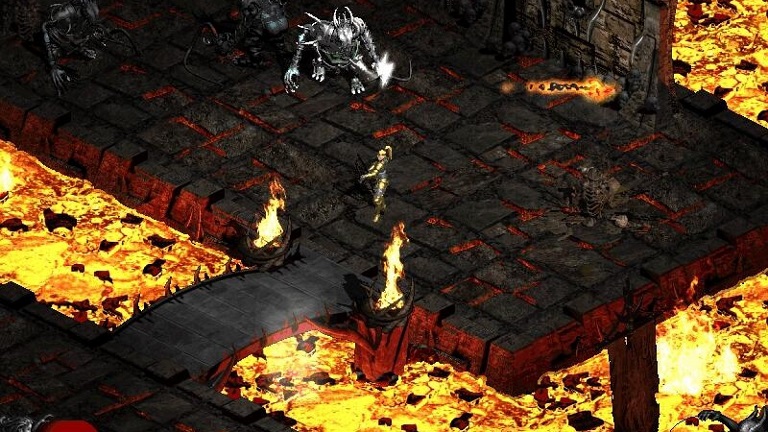 It's a real freedom that the player can be wherever he wants in a big world, with whatever objects he wants, some of which are quite rare and thus develop a unique form of play working with characters of one or another background. Diablo's story is also fascinating with a legend about an eternal war between good and evil and the human nature torn between the two sides. For those who love the style of the game, Diablo 2 has become the golden standard for many years. It gives the player a hunger to continually become better with a more advanced character in a circle that repeats every upgrade.

Admittedly, with the advancement of the 2D gaming world, and the fact that at least Diablo XNUMX was technically limited to games that looked significantly better from other genres as well - a famine was born, a new diablo hungry, a game that implemented new technologies and provided a more modern experience. Admittedly, a host of events led to the cancellation of Development Diablo 3 by the original team (which was due out around 2005) and only after a few years in 2012 did we get Diablo 3 a little different, developed by a completely different team at Blizzard.

Aside from the late launch mess, Diablo 3 moved significantly away from Diablo 2's style and so the jury game community broke up when a large portion simply refused to accept Diablo 3 as a true successor. "The graphics are too colorful and joyful," "the depth-less game" and "the gameplay is not fun" are common complaints among those who gave up Diablo. Right here, racing seems to have begun to find games that would fill the hole created by Diablo 3. This, although your loyal slave may think Diablo 3, at least today, is a pretty fun game, despite its drawbacks.

This article is mainly devoted to games that, in my opinion, are considered Diablo's successors, inspirational, or at least come as a substitute for those looking for archery hunting and character advancement.

The same hole, which for many exists even today, creates a big vacuum to which many game keys are drawn and as a result we are actually experiencing a real renaissance, beyond a situation where there may be one or two substitutions to the situation where new titles are announced within days and weeks of their aim to attract The ARPG genre enthusiasts with real-time battles on its issues.

Of course it is very important to note what is considered by many today to be the spiritual pursuit of Diablo 2 and one of the most popular ARPG games of our time - Path of Exile, a free game developed by a New Zealand studio called Grinding Gear Games.

The failure of Diablo 3's public perception along with the success of Path of Exile marks a clear thing - You can make a serious replacement for Diablo and do it successfully. The race for successful ARPG games has begun and everyone wants a piece of the cake.

The Wolcen game: Lords of Mayhem Developed for several years by Wolcen Studios and uses the engineCrytek The sparkly. This game promises to give gameplay style flexibility with a huge and extra wide feature, as well as smooth and fast playability alone or in the team. This game was launched on January 31st and marks the upcoming launch of a wave of next-generation ARPG games. Up to now, alpha and beta versions could be played through the Early Access set.

Last Epoch game Developed by Eleventh Hour Games, the emphasis is mainly on the amount of possibilities given to the player in a particularly large world, which exists simultaneously in two different timelines that the hero can visit in order to experience certain areas in two ways. This is where depth is done Development Detailed of specific attacks, with a feature tree for each one. This game was due out in April, but postponed to the last quarter of 2020 to make sure it goes out into the market in good shape. Early access to the game can now be paid through the Early Access Bets program.

Unexpectedly and unexpectedly, Microsoft-owned Swedish Mojang decided to take Minecraft's world to Diablo with a brand new ARPG game Named Minecraft Dungeons. As far as is known, this game will also stick to the familiar formula with special objects and many types of characters that can be selected for different game forms. The game is set to arrive this spring, so we are expected to meet it between March and June.

The Torchlight games series is the brainchild of Max Schaefer, one of Diablo and Diablo 2.'s original creators. These games are more clinging to game elements over a perpetual hunter of objects with picturesque graphics and joy. Now Max's studio developer, Echtra Games is playing a new series called Frontiers that wants to become more complex and updated. Torchlight Frontier does not yet have a launch date but it is expected to go out into the air "somewhere in 2020".

The Lost Ark game is a bit unusual on the list. This is a Korean MMO ARPG game which is in beta. We know it will be launched in Korea and other countries like Russia, but we have not yet received official approval for English launch in the West (Europe, America). It's a game with rich graphics and a fairly large world that combines things that usually meet in MMORPG games such as various professions (fisherman, division) along with Dynasty Warriors fights (relying on standby attacks, a large number of enemies flying each attack).

At this time, a gray cloud is over the game's launch in the West and if the prospects for faster advancement of characters by paying in the virtual store are removed, most Western industry has stepped up but defends that considered standard in Korea and Russia.

A host of other ARPG games have received teasers and announcements recently with launch dates that could be quite far away, perhaps even after 2021 since Development Of complex games can take many years in this case.

Project F Of Riot Games is a title we received a teaser on as part of a number of titles announced two months ago. League of Legends developer is looking to expand and is using the broader worldscape that has already built the game as a platform for a new ARPG game.

World of Magic The Gathering gets a trailer for a multiplayer MMO ARPG game called Magic legends. It will be very interesting to see how this will unfold, knowing that this world is also full of stories to tell.

Of course we didn't wait for you, Diablo. Blizzard knows that the audience is thirsty for a new ARPG and announces a conference in Lizzon this year Diablo 4. According to Blizzard, this game is in the very early stages of development, which means that maybe only a year from now we will be able to get a launch date, hoping it will happen before 2023. Diablo returns to sources. Dark, Cold, full of blood and stink of dead bodies. Blizzard understands the thirst of the crowd and responds accordingly. This game has been in development since summer 2017.

The Path of Exile game gets a whole new layer of color to invite those who have been disliked by the gameplay, animation and other features of the existing game or existing players who simply want a revamp. Path of Exile 2 Not given an official launch date, but we'd be surprised if that happens before 2021.

Here are a few more things to note - just yesterday Moon studio (creators of Ori and the blind forest) announced that they would open an ARPG game "to redefine the world of ARPG games". Of course there is no date, but you can make do with teaser words.

The Grim Dawn game It is an ARPG game that supports serious modding, has received a number of expansions since it came out and significantly improved - well worth a visit for the genre enthusiasts.

Hades game Launched this month in the Early Access program (beta) focuses mainly on the plot and the games Hack and Slash is agile and addictive.

Game Pagan Online He is such a combat system that is reminiscent of MOBA games and may be worth your time.

So far for the status report for the Hungry Diablo and other ARPG games. 2020 seems to warm the genre, and probably 2021 will take it to really new heights. There is what to expect.


Wait, there's more!
Join To the group of zon And you can receive exclusive updates on various offers on the net, share content that you find interesting, consult with members of the site, and more - Join now!
Tags
Blizzard Diablo 2019 GAMES 2020 GAMES
Share
Facebook Twitter LinkedIn WhatsApp Telegram