The story behind Diablo • HWzone

How to create one of the company's most favorite games Blizzard Ever since, which has become an entire genre of its own? The answers are inside

As technology progresses, games become more graphically complex, and the quality of their production increases from year to year. But while new games of honor are in place, For nostalgic games, many of us have a special corner in an unmatched heart. This time, we're going to go back in time to the mid-1990s, a time when gaming for PCs was gaining momentum, and one small company was gaining more and more space in the heart of gamers - the Blizzard company.

At that time, after the company's success with the Warcraft games series, the studio sought to expand horizons. At the same time, David Brevik of Condor's gaming studio conceived a role-playing idea, but was rejected by a host of distributors who claimed the genre was dead. Eventually, Blizzard, who had heard of his idea, decided to collaborate on the battle system In real time, and that the game will also include a multiplayer. The result of this collaboration was also that Condor merged with Blizzard and received the new name "Blizzard North".

Thus in 1996, the innovative roleplaying game Diablo was released. In the game we enter the shoes of an unknown hero, who sets out on a journey among various labyrinths to destroy Diablo, the master of terror, who tries to impose his reign of terror on humans. The game allows you to choose the hero who understands a warrior, a magician or a crook (there is no really successful translation of the word Rogue), and a monk if you have the Hellfire add-on that came out a year later. 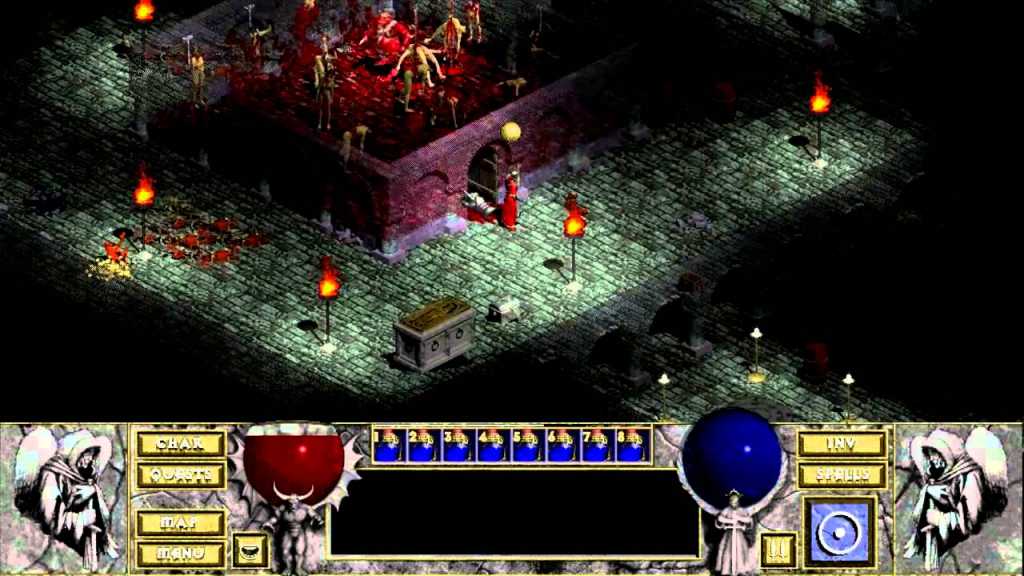 This is a real-time action game where the puzzles are created randomly so that it gives quite a bit of value to a new game. During the game you can fight a host of monsters and collect different equipment that strengthens the character, so chasing good equipment becomes a central part of the game, and part of what makes it so fun.

In terms of playfulness, Diablo 1 did not really get well. We really feel that this is an old game, even in terms of menu design, and especially because of the battle system, which feels rigid and makes managing battles against dozens of enemies a very difficult task. Admits that I did not really enjoy it when I came back to play it for the chapter.

In addition, Blizzard is no longer officially familiar with the game, so if you want to try it, you will need to obtain a second-hand copy or simply download it from sites like a journey to the past. For example, I have a second-hand copy, but unfortunately only the CDs and not the original boxes. 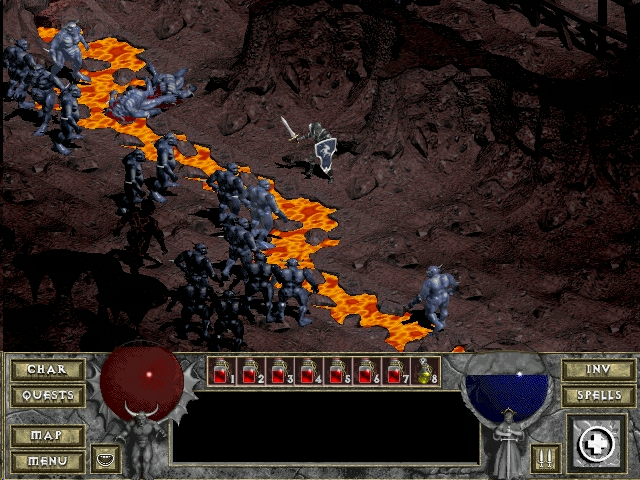 In any case, the game was not bad at all, selling 2 and half a million copies, until 2001 then dropped off the shelves. With the success comes the sequel, and in 2000 Diablo 2 was released, and the expansion a year later on 2001. And here's a quick confession - Diablo 2 is one of my all-time favorite games, and it's just great. The jump in quality between the first game and the second is just so phenomenal that it's really hard to get back in the first game after touching the second.

At Diablo 2, we are once again entering the shoes of a new hero, this time there is a much larger selection of characters. You can choose from Amazuna, Barbarian, Necromancer, Paladin, witch and two favorite classics I have at length: assassin and druid. Each class is completely different from each other and completely changes the style of the game. Not only that, the game has added a skill set. So even playing with the same character can vary from game to game, depending on which skill you choose to invest your points. 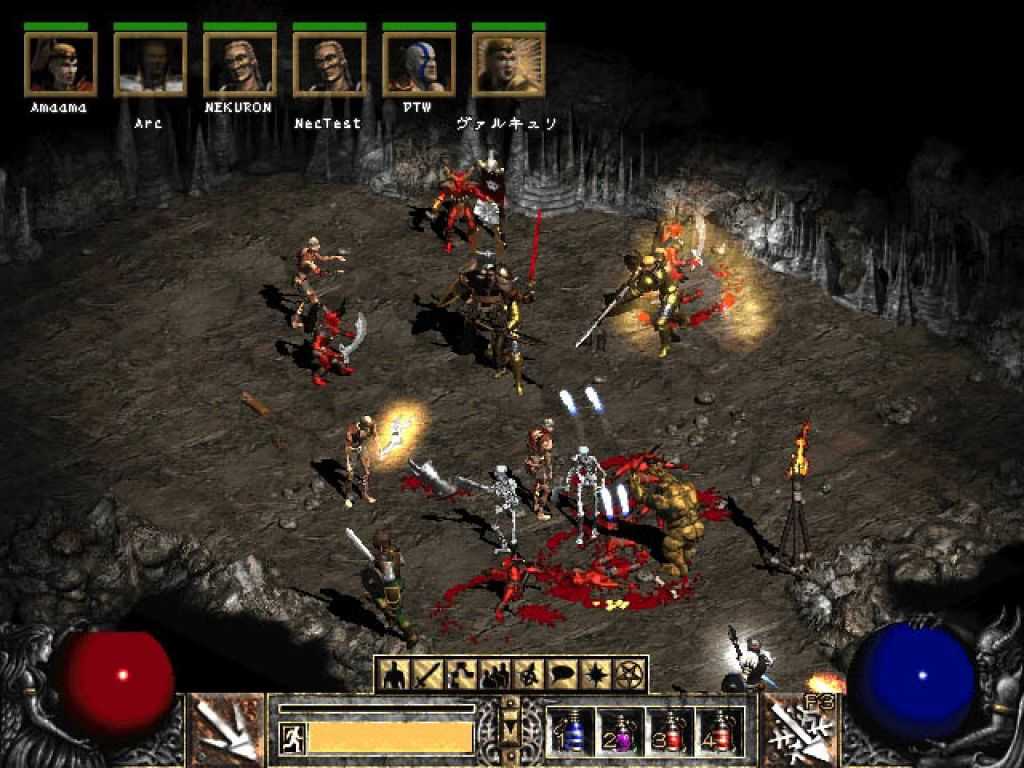 However, in the second game the mission is much broader - you must destroy not only Diablo who returned - Spoiler - and take over the hero of the first game, but also deal with his two brothers from Pisto and a husband, as well as a host of demons and people who went to work for Diablo and his two brothers. The course of the game takes place across very different geographical and cultural areas, when in fact you are in perpetual pursuit of the same poor hero, leaving traces of destruction everywhere he comes. The game has a lot more plot and lore, even though they're not the main part, but the gameplay, and all the characters are spoken.

The battle system has also been improved in a crazy way, and now fighting management really depends on your abilities alone. There are many more monsters, even if sometimes they are the same monsters with a different color and name, and there are many more types of objects and equipment, plus ways to improve it, making loot hunting an even more addictive business.

The online scene of the game was also super popular, so you could play the game with friends or random people from the Internet and go through the experience together. It's a game that is completely in the test of time, and fun today just as I remember it when I played it before 15 a year, and even now that I've re-played it for review, I found myself sinking back into dozens of hours of ghost hunting and magical objects.

The expansion of 2 is one of the few games I have in the private collection in a large box, just like I bought it when I was in the division. At that time there was no problem lending to friends and the game code was not one-off, so the original game borrowed from a classmate, and I bought myself a copy of my own just a few years ago.

Once a game box was much more invested, and in the box came a booklet that tells about the world of the game, detailed explanations about the monsters and the new characters and more. Sometimes I'm really sorry that modern games no longer come in boxes like this. 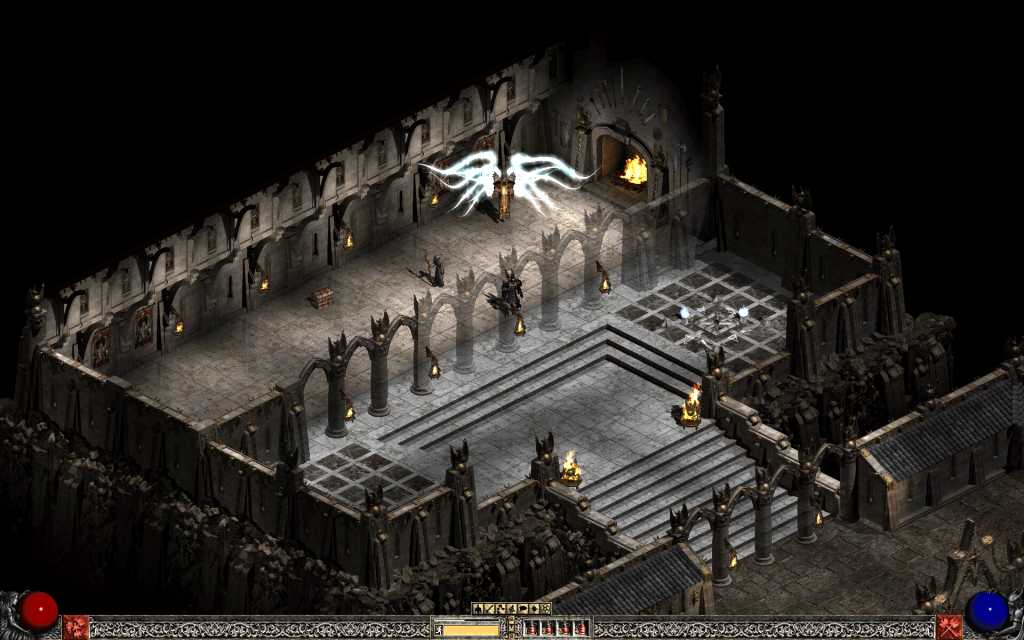 Anyway, unlike the original game, Diablo 2 and its extension can be purchased from Blizzard's site, and they even released a patch two years ago that allows the game to run on Windows 10. Unfortunately, the online option has long been inactive, but the single Flair is also so excellent, so if you are a nostalgic fan and you haven't played it, I really recommend you try it - in my unbiased opinion it is much more enjoyable than Diablo 3 released on 2012.


Wait, there's more!
Join To the group of zon And you can receive exclusive updates on various offers on the net, share content that you find interesting, consult with members of the site, and more - Join now!
Tags
Blizzard
Share
Facebook Twitter LinkedIn WhatsApp Telegram