NVIDIA on the defensive: hot games for free, but not for everyone (updated) • HWzone

Enoydia Launches Pick Your Path - Benefit of Receiving Free Computer Play in Kenya of One of its Powerful Video Cards, But With Some Limitations

One of the ways to influence a consumer to buy a company's product is to offer him the benefits of the product, which is exactly what the graphics core manufacturers have begun to do in recent years.

Over the years there have been few cases where a free game was offered as part of buying a particular video card, but the trend really began In the Never Settle package Which launched a company AMD Which we all know, which includes a number of gift games depending on the type of video card purchased - the stronger the video card or the stronger the series, the higher the amount of games the consumer gets.

Now, Enoydia joins the celebration (albeit one-time) and in collaboration with computer game developer Ubisoft and launches a benefit called Pick Your Path. This benefit allows the consumer to choose a computer game from three games that are expected to be particularly popular - The Crew, Far Cry 4 andAssassin's Creed Unity. The code for the game can be purchased by anyone who buys one of the following video cards designed for the company's upper market segment: 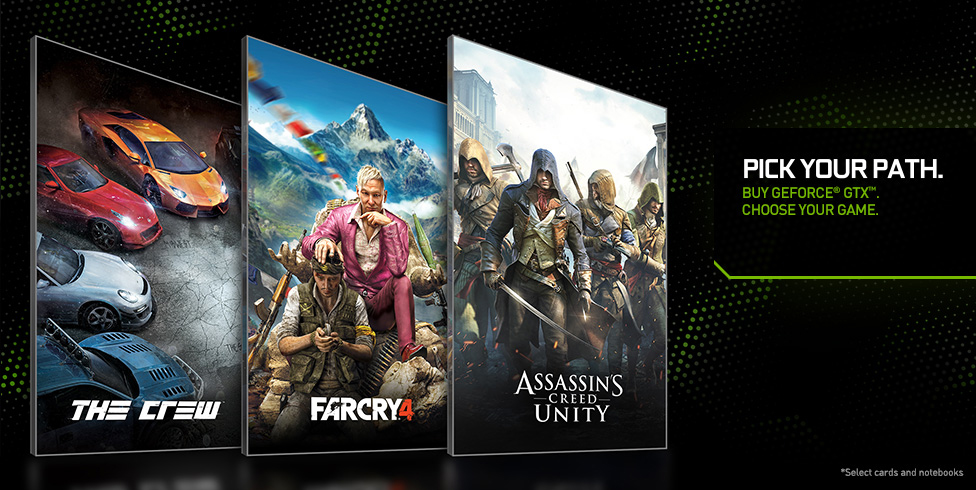 As always, not everything is rose - especially not us, residents ישראל. The company announced that the benefit is valid only for a limited number of marketers, as at this time there is no marketer in our country that gives this benefit. Therefore, if you want to enjoy one of these games for free, you will need to purchase or book your ticket from abroad.

According to the details provided by the company, the offer began yesterday (whoever purchased the ticket before is not eligible to receive the game) and will only last for a limited time - we guess by the end of the year. For those of you planning to purchase one of these video cards - will you still make the purchase in the country without receiving a gift game? Do they think such global companies should consider small countries like Israel? Share us in the comments.

updating: Perhaps as a quick response to the favorable offer of NVIDIA, Shows the competitor AMD Its own update to the Never Settle package in the form of the addition of the title Civilization: Beyond Earth to ticket buyers R9 295X2, R9 290X and R9 290 - in addition to the three games (from a list of 26 titles) they were eligible for so far. There is no doubt that the fierce competition that exists between the two video card makers during this period is a pleasure for consumers.