Is it possible that a company Dark Creates slowness in instruments iPhone Exist for the launch of a new generation?

"Planned obsolescence" is a concept in economics and industry. It could be assumed that a commercial company would strive to provide the consumer with a durable, non-decaying product, with the intention of transmitting an image of a quality and reliable manufacturer. However, such a product could end up seriously hurting the company's future sales: If the customer has a good, reliable and fault-free product why would he buy a new product? The basic idea, then, is to plan the life of a product in a planned way with the aim of getting the consumer to buy a new product as soon as possible.

The discussion of the existence of Planned obsolescence Continued for many years. Already in 1924 native on Incorporation of companies (Cartel) For the production of lamps with the intention of producing incandescent bulbs with a limited lifetime of purpose. One of the familiar stories is about an incandescent lamp installed at a fire station in the US in 1901, many years before the lamp cartel was erected. This light bulb is constantly on fire until a few years ago. Watching the bulb.

Since the installation has been replaced already two cameras Network, But the old light is still on. Planned obsolescence does not necessarily require the end of product life. In many cases, these are changes in cultural fashion that force the consumer to replace a product or item of clothing in excellent condition in favor of another, more fashionable product.

In 2014, a Harvard student named Laura Trucco published a study of changes in Google's search trends for the words "Slow Iphone". She found that shortly before the release of a new iPhone device, a significant leap occurred in the search of these keywords. The researcher also examined whether there is a similar phenomenon in the search for the words "Samsung Galaxy Slow" at overlapping times to launch products סמסונג New, but found no connection in this case.

The results of the study led many to speculate that before launching a new product, Apple releases a new version of the older iPhone that supposedly creates a slowdown in the device. According to speculation, Apple's goal is to spur people to buy the new product after they feel that their experience with the old device is impaired. Mappel, by the way, did not comment on the study published in "New York Times.

Strengthening the claim of planned obsolescence on the part of Apple appears in the video YouTube From September last year. The video examined two 4S iPhone devices shortly after the launch of the iPhone 6S. One 4S device has a new operating system and two operating systems installed earlier. You can clearly see that the device that was not updated is running faster. Of course this does not mean that a company Dark Worked intentionally to slow down the device. Certainly, a modern and advanced operating system may require larger system resources that the old device does not have, but if so - why Dark To update this system on the device while apparently damaging its functioning?

In the past, there have been other complaints against him Dark As to the planned statute of limitations. In 2003 was published a video of Neistat brothers in which was played a recording of one of the brothers chatting with a representative of the service Dark. The spokesman, whose name is Casey, complained about the battery of his iPod. He said the battery stopped functioning properly after 18 months. representative Dark Answer him that repair (replacement battery As mentioned above) will cost him over $ 250 and recommended that Casey buy a new and updated iPod.

The video generated many echoes including Class action Against Dark At the end of which the Company undertook to extend the warranty and to grant compensation for the purpose of replacing or repairing the instrument.

Following the recent launch of the iPhone 7 we have again tested using Google Trends Are there searches for search words 'Slow iPhone'. In the graph before you it seems that while there was a jump in searches in the product launch period, surprisingly - two years after Laura Trucco's research was published, there was no significant jump in word search in 2016. Does the graph say that Apple internalized the audit and decided to change policy? Maybe it's too early to draw any conclusions. We are only at the beginning of September and this trend may change later. 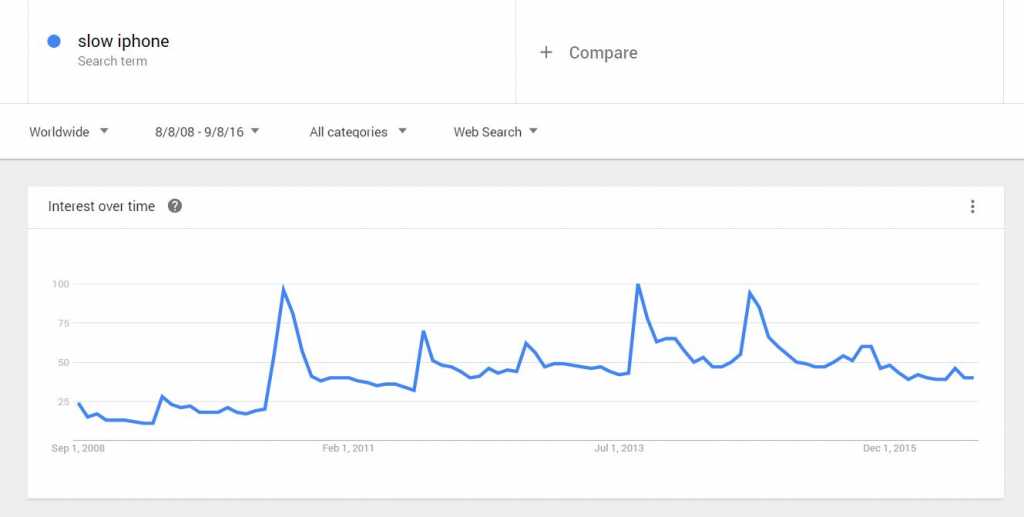 Some say the trend jump in the search for the words "Slow Iphone" is naturally due to the rise of public discourse on iPhone in general on the eve of its launch. But in checking Google Trends for the words "Iphone Earphones" we have not found similar jumps over the years. Precisely in recent days, after launch IPhone 7 - Yes there is such an increase, perhaps in view of the fact that it was launched with a fundamental change in the configuration of his headphones. 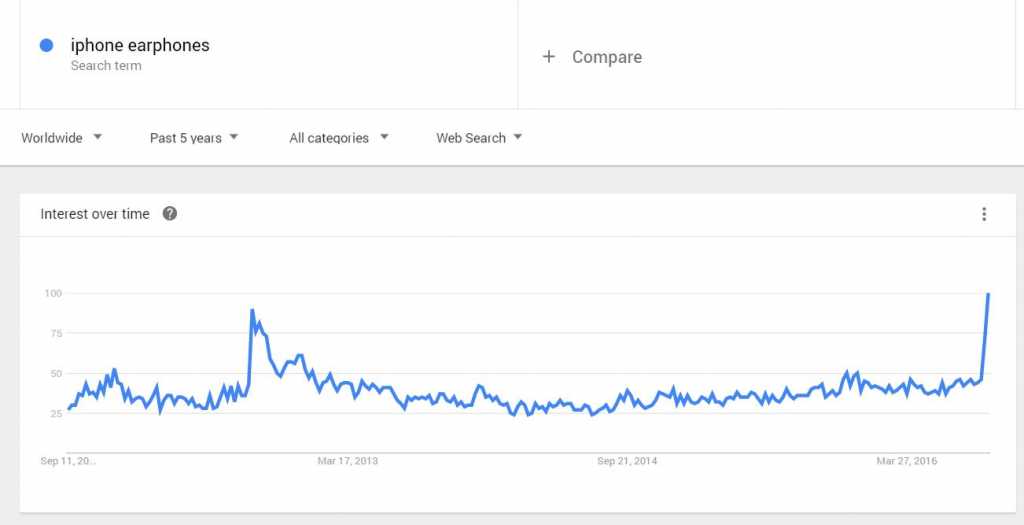 While in the past, obsolescence caused the product to stop working properly or to reach the end of its life - as in the case of incandescent bulbs, today's intentional obsolescence does not necessarily mean harming the product but leaving the customer behind technologically.

Such policies can also be seen in other companies' products. For example - version Android 7 The new one can not be installed on the Nexus 5 devices launched before 3 years, users will have to buy a new device if they want to enjoy the enhanced features, as well as the new Kaby Lake processors that will run Only with 10 windows Microsoft, when users of older versions of Microsoft Windows Will have to upgrade to benefit from improved technology. The same holds true for me graphic cards Old ones - while they continue to function properly, new technologies make them much less relevant. The problem with a seemingly deliberate slowdown is that a product stops functioning properly even though technically it could continue to operate efficiently and quickly.

Deliberate obsolescence is not necessarily a logical step by a commercial company in a competitive world. In the event that an iPhone device stops functioning properly, a customer may abandon Apple and move to a competing company. At the same time, many Apple users buy their devices from within Almost religious loyalty Brand. Perhaps the fact that many of the users are a captive audience in the magic of the computing giant allows it to create a deliberate obsolescence that will cause them to choose in any case on the device iPhone New and not competitors.


Wait, there's more!
Join To the group of zon And you can receive exclusive updates on various offers on the net, share content that you find interesting, consult with members of the site, and more - Join now!
Tags
Android iPhone
Share
Facebook Twitter LinkedIn WhatsApp Telegram