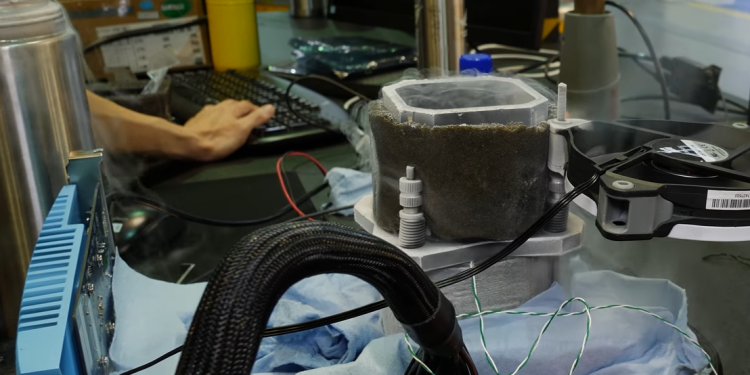 The famous speedier Der8auer put his hands on the unique hexagonal processor of the Intel, Which has already begun to appear in stores across the network, reaching the 150 megahertz distance from the absolute peak in the category

The matter around him may have been swallowed up by the clamor generated by the nucleus of the future, But the unique and special Core i7-8086K Is the present of Intel, Here and now, that even has already reached stores like Amazon and-Newegg Equipped with $ 425 price tags (a few dollars lower than recommended) and above - though without the option of direct delivery to the Holy Land, for now.

It was natural to assume that the hexagonal processor capable of reaching a frequency of 5 GHz for a single core directly from the factory, and a frequency of up to 4.4GHz for all cores, with an open multiplier for easy and further accessible speed, would be a very interesting basis for advanced and extreme speeds. And this trend has already begun, thanks to a combination of forces between the company G.Skill To the renowned German Oberkluk Der8auer.

Using liquid nitrogen to cool a processor separated from its metal cover will reach a formidable operating frequency of 7.24 GHz per second for all six cores, based on a working voltage of not less than 1.85 volts - not far from a frequency of 7.409 GHz to it A processor has arrived Core i7-8700K, as the highest ever product to hexagonal cores.

God-Core i7-8086K has not managed to break the record for now, despite being the most carefully selected product from the stock of chips that went off the production line before packing and packing - but not surprised if that happens in the near future, when professional speeders get more opportunities to experiment and "play" In the new work, in order to find the optimal settings and conditions specific to it. Der8auer itself also stated that there is further potential for improvement, as it was based in its experience on known effective settings for the processors.Core i7-8700K, without having the opportunity to get to know the similar, but still slightly different, CPU that was used.

Who knows, with the arrival of the C-Core i7-8086K In stores in the coming weeks we may see not only performance songs and speeds via LN2 - but also speed records in "popular" and slightly more relevant speeds, based on air cooling and water cooling. We will continue to follow.