The developer will bring the Doom The new and Fallout 4 into the age of virtual reality, and will provide Skyrim: Special Edition free to all Legendary Edition owners on PCs

Also this year Bethesda's press conference at the show E3 Was full of all good, with a combination of new titles and improvements and extensions to existing popular titles. After we introduced you to Dishonored 2 and Prey - it's time to talk about some of the company's target audience expansion plans for Doom, Fallout 4 andSkyrim.

The new Doom, which has been welcomed by a large number of visitors and players, will have a free addition of maps and capabilities for its online game (often referred to as the weakest link), along with improvements to the SnapMap interface for creating maps and, of course, A modern game in 2016.

However, in contrast to the general trend in the market, the developer decided to also offer a free 'demo' for the game - for a period of only about a week: Steam users and console owners as wellXbox One and the-Playstation 4 will be able to find a downloadable version of the game that includes the first stage in its individual player mode, to be impressed before making the purchase. The offer will only be available by the end of next week, so it's a good idea to take advantage of it right now.

The hit Fallout 4 will also receive more DLC packages that will expand the amount of content in it - the last three expansions, which will be launched every month starting next week, are free for all Season Pass buyers and for anyone who has not bought it. If that's not enough - Bethesda has announced that both Fallout 4 and the new Doom will be launched in full virtual reality support versions, based on Steam and the GogglesHTC Vive based on the platform: Fallout 4 will come during the next year, andDoom Will come sometime after him. How exactly will it look and how will it work? These are questions that we certainly hope to receive the answers soon. 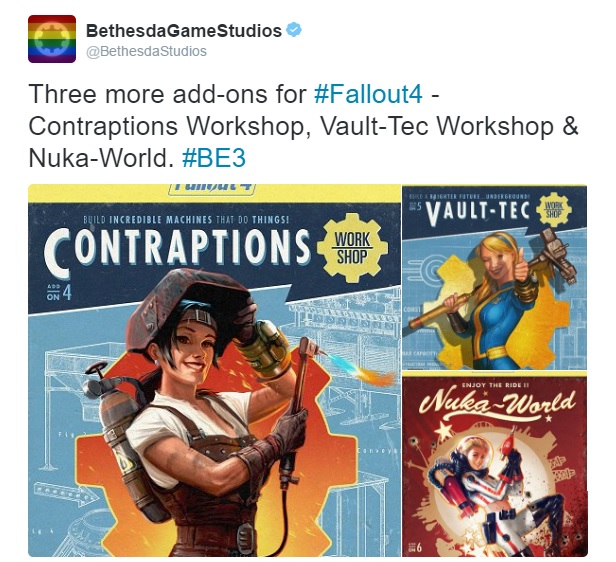 For dessert, Bethesda made another announcement - that all those who purchased The Elder Scrolls: Skyrim In its full version of Legacy Edition (or else purchased the game and all of its DLC packages), they will be eligible for free upgrade to the full-featured, full-featured version with enhanced graphics capabilities when it is launched for the new generation consoles as well as the 28 PCs in October. The new version should offer the ability to install and manage the direct modifiers that exist in the Fallout 4, but will the visual upgrade truly compete with all the good modems have to offer for the title? We'll see.